Recent film adaptations have not given me opportunity to say this at an earlier date, but The Hulk is most definitely my favorite Marvel character. 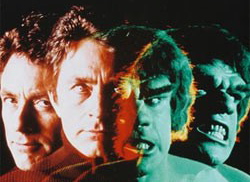 I wasn’t much into the comic books, but I very much liked the television drama. I first felt my true love for the minor key when I heard the Hulk theme “Lonely Man.”

Thanks to the recent addition of rabbit-ears, we get RTN, the “Retro Television Network” which shows “The Incredible Hulk” TV show weekday evenings.

While I’m no Hulk-ologist, I always liked the subconscious and everyman elements of the Banner / Hulk dichotomy. Even as a young kid I “got” that there is, in every man, a powerful force that he, betimes, may not be in control of.