We saw “Hellboy 2: The Golden Army” last weekend. I disliked it. It is for movies such as this that the 2.5 star rating was invented. There were some good ideas, in spots, but never that unified, compelling vision thing ( apologies Poppy Bush ) just never really materialized ( like Jr. Bush ). 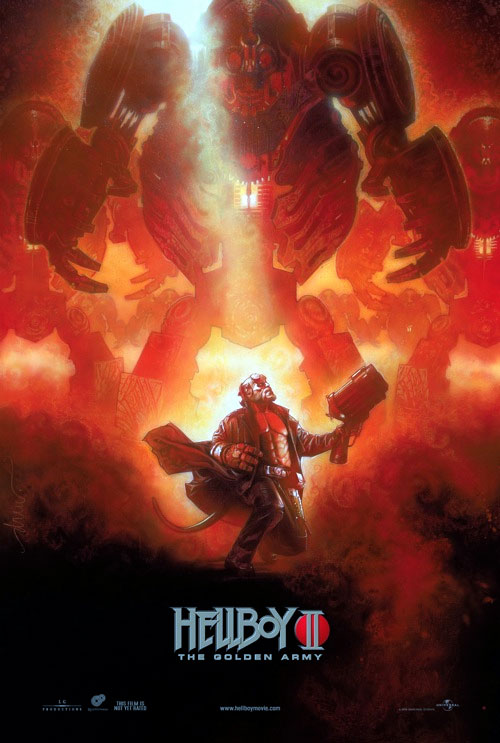 So here’s the gig. Humans are greedy and destroy the earth’s natural sylvan beauty. Elves and goblins, understandably tired of this, put together an unstoppable army that numbers, in the Lovecraft ordinal series, “seventy by seventy” unstoppable soldiers. After these clockwork and aurium terminators lay waste to such a degree that the beloved elven woods are actually damaged by the excess of blood, the Good King, his Moody Son, and his Good Daughter ( the twin of Moody Son ) decide to split up the crown which entitles the wearer to command the horde and put the army into a slumber.

Moody Son is not too happy about this but Good Sister agrees with Wise Father-King and thus began a truce lasting unto the present day.

Guess which unspeakable crime Moody Son must inflict? Guess who he must hunt to get that elusive missing piece? The movie telegraphs its arc in the first 8 minutes. But they don’t call hero stories archaetypal for no reason, so I don’t bear this as a mark against the film.

The movie’s art direction is excellent.

The entire backstory I recounted above is told in a “reading of a story come alive” with a stripped-down animation that looks like ornate chess pieces acting out this tableaux from the forgotten pre-pagan yesteryear. It was a great start. It was a compelling, and eerily child-like setting of the story’s parameters.

Now, in time I believe that director Guillermo del Toro’s notebooks will be revered like so many sticky-pages of “Heavy Metal” magazine. His eye for creatures presents a large section action set in “The Troll Market”, a cross between the Mos Eisley cantina and Diagon Alley.

Stunning art direction is also seen in the unbelievable “Angel of Death” who recalls some of the more disturbing elements of “Pan’s Labyrinth”:

Finally I loved the soldiers of the Golden Army as steampunk Terminators. The meticulous attention to the gearwork appearance worthy of Gabriel “Sylar” Grey was something not required but which really showed that del Toro loves the material and great art design.

On these levels, the movie is a stunning success and I would love to see a fan edit that turns this into 5 minutes of a deliciously beautiful visual nightmare.

Ron Perlman also deserves some kudos for playing the working class Apocolypse-bringer Big Red himself in a realistic way.

But here’s the counterpoint, and I think I could do no better to quote Dustin Rowles at Pajiba

Guillermo del Toro throws a ton of eye candy at you, and it’s difficult to digest the true mediocrity of a film when the director keeps plinking you in the forehead with shiny pennies. But more than that, del Toro makes the shiniest pennies in Hollywood—golden pennies that reflect sunlight like a funhouse mirror in Alice’s Wonderland.

Well said, the visuals aside, the story, quite honestly, is entirely lame…and I liked the first one!

First, important questions are brought up, and never answered. Red and Liz’s relationship is explored and some fairly significant issues ( at least to the mind of anyone who’s been in a real grown-up relationship ) surfaced that require some delicate and sensitive discussion or couples therapy.

Some things like “Why am I the only one who cleans up the dishes” cannot be replaced by “whew, we narrowly avoided death there, I love you!”

Further, mentors give advice that is supposed to come in as important at a tell-tale moment, when the character chooses to evolve, you know, “use the force” style, to stop being so immature and be a better man / woman / demon–but. Those moments never surface. Instead we have these sagacious chestnuts that never get converted into kinetic utility.

Now why, in Anung An-Rama’s good name would such a character ever have conceivable reason to utter: “Suck my ectoplasmic schwanstuker”. Verily, the studio was assured this would get those 12-year-olds in the aisle rolling. For the 30+ set it merely set the eyes a’so.

My biggest complaint is a lack of connection to the Hellboy mythos. I love the Hellboy mythos. Black cult Nazi’s are manipulated by daemonic elements into opening the gateway to Hell. They think they’ll get demons to defeat the Allies, but the demons plan no such thing, but rather to let their reign on Earth begin. The Nazi’s black ritual is interrupted and the plan is thwarted. By accident a single demon does come through, but it turns out it’s a young, naive, demon who incidentally happens to be the one who’s supposed to open Hell’s gate. Thwarting his destiny is the fact that he’s raised by loving and kind humans and thus is set up all sort of angst around Destiny, Duty, Fate, and to what degree a man can beat his fate ( probably explains my like of God of War.

Is that not some compelling mythos or what?

I can parallel this to the “X-Files” back in the day. You’d tune in for the show, but the ones that were like crack were the ones that advanced the mythos that covered the Scully abduction or featured The Smoking Man ( there was even a song about it ).

In “Golden Army” we get only but brief reminders that this red-chested Hudson Hawk is something of a Biblical-scale bad-ass but only once or twice ( Abe sees his flaming crown through special glasses, the Angel of Death calls him by his demon name, and Good Princes asserts his royal blood by naming him as a demon and heir to the Fallen One). These unique elements of his background never played into his motivation or into how he handled situations ( except for the Right Hand of Doom occasionally illustrating its superior ability as a bludgeon ). It was like watching an entire X-Files season and not seeing Mulder…who would want to watch that?

Lastly there’s a really irritating battle between the forces of myth here. So much of the movie hinges on just how many angels can dance on the head of a pin. Hellboy, a demon, with an indestructible stone hand is beating a Middle Earth-worthy troll. In some ways it makes me think about debating who would win in a fight Terminator or Neo. Or would the Easter Bunny beat Santa Claus’ ass if he knew ninjitsu. It makes the audience’s appreciation and ability to scale threats accordingly difficult and, as a result, a lot of dramatic tension goes down the crapper.