Yes, that title is from a Radiohead song, which is meant to say that I saw their brilliant performance last week at the (mouthful) Cynthia Mitchell Woods Pavilion in Houston. I should write at length on the matter, but really, what is there to say about the act?

Come to think of it, those last two points are worth discussing.

The light show was terrific with a wide screen divided into 5 sections. In each section was a camera filming a band member or an activity. During certain songs, other light effects were overlain on the screen. They reminded me of some of the more experimental drawn-on-film animation that emerged in the early 20th century as part of the futurist or modernist movements. Around and before the band hung tubing that contained lights that would vibrate with light in tune with the music. 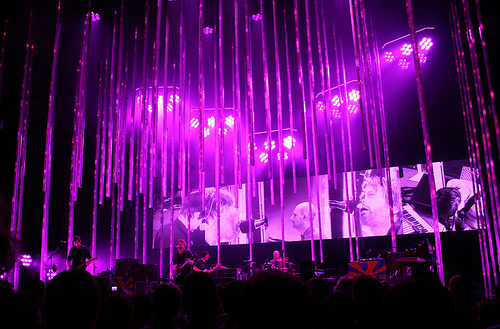 The most powerful moment is when Thom sat at the piano and mugged it up, lazy-eyed and proud of it, while performing “You and What Army”: “Come on, Come on / Holy Roman empire” 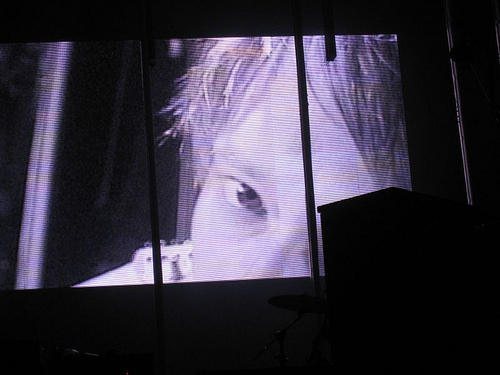 About the time I discovered that my parents’ generation had some stunning achievements in Music, I realized that thanks to the technology and fidelity of music technology of their day, and all days subsequent, music is now able to last, effectively forever. Unlike acetone or wax recordings that degrade exponentially, the LP and the CD and now the MP3 are all, effectively indelible. Therefore generations of the future will be able to evaluate the musical tastes of the preceding generations in a way that has never before been seen.

I ask myself, what is the music that they will like of my generation. I can say that I think few songs are as sweet as the Allmans’ “Melissa” and there is the de rigeur appreciation of the Beatles and the Stones. So the question again returns, what if mine is worth paying attention to. I had always suspected that it was Nirvana that would make it across the inter-generational void, but now I don’t think so. I think that Nirvana will remain perpetually stuck in a formaldehyde bath ( I’m looking at you 101X ), and, to be fair, it just doesn’t seem as relevant now. In the sense that every band today owes their life to Nirvana, yes they seem relevant, but whose mood, whose words, whose lyrics are timeless?

In the years since I heard “The Bends” and “OK, Computer” their messages have grown more potent. I think, now, Radiohead will be the ones that transcend. I remember one day walking down a street in Holland and I checked out the newsstand and saw that some British music press mag asserted in their list of the top 50 British albums ever that Radiohead’s “OK, Computer” was atop the White Album, “The Rise and Fall of Ziggy Stardust and the Spiders from Mars”, T. Rex’s “The Slider” and I thought it was pure anathema. Well, I’m still not sure if it’s #1, but it’s definitely in the top 5. I hope that some day I’ll be able to say…

Me: “Wow, huh, that was from Radiohead’s In Ranbows right? Funny thing, that was a record they released on the internet first.”
Disbelieving Kids: First compared to what?
Me: Uh, nevermind. Yeah, we went and saw them live.