This will be spoiler-laden, so if you want to keep the mystery, move on. 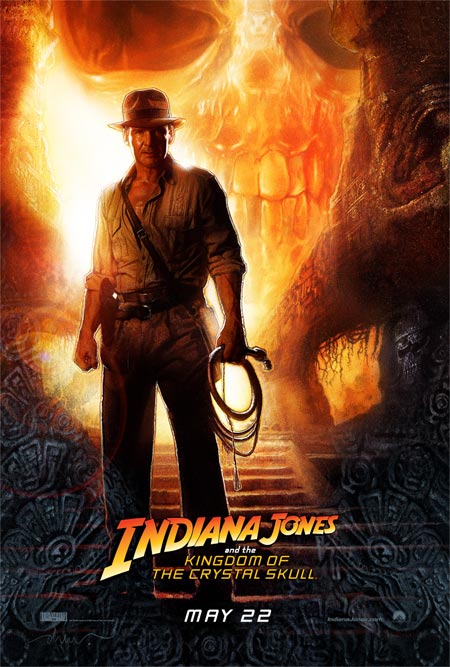 In the back-story some conquistador finds a lost kingdom run by trans-dimensional beings ( aka aliens, but I guess that noun’s too pedestrian ) magic city and STEALS one of the skulls. Our Hero and The Bad Guys contend for the skull and are in the room as it is returned to the body from which it was stolen. This triggers an action such that the “hive mind” of the aliens “re-activates” and they become a living alien entity. The alien kills The Villain ( more later ), Indy & Co. escape, denoument et fin.

OK, so the key plot point is that skull, when returned to chamber, will initiate the opening of the inter-spatial portal. So, we can assume that previously those 6 skulls were sitting there such that the conquistador could have stolen it.

But wait, if they were all present then the corporeal interdimensional being would have been there, and do you think for a minute he’d let some scurvy-laden, syphilitic holy warrior steal his skull?

Indy, because his character is a RESEARCHER and an ADVENTURER thinks “My goodness, this is just like the skulls seen in the Inca world….”. Indy takes skull to South America ( red line on map effect ). Indy realizes that it is a sentinel ( in fact, the original Arthur C. Clarke title to the short story that became “2001” ); that for the being that realized the nature of the skulls and brought them from all over the world to be re-assembled, to him would go great reward.

Perhaps in seeking to leverage Indy, the Russians steal girlfriend and unbeknownst to him son (“What you didn’t know you had a son Dr. Jones? It will make no difference to you when I kill him….”), etc.

##Topic 2: Conflict between God and Science: Who’s in charge?

A friend of mine once had an entire blog where he complained about prophecy and god and religion in the movies. The essential problem is that when you bring up prophecy you’re effectively asking “Who’s in charge of reality, anyway?” For if you have a prophet you have to either buy into a whole chain of religious ( i.e. non-rational ) thinking or accept that a lot of unjustified backstory has been brought in.

Now, in “Raiders of the Lost Ark” and “Last Crusade” we buy the Judeo-Christian myth wholesale. “Yes there were Israelites, they had a box of power, it was their weapon and defender” or “Yes, we get it, there was a Jesus Christ ( a complement to what we saw in Raiders ), Joseph of Arimethea took his blood in a cup and that cup has magical properties” are accepted by the audience. The essence of the movie is belief in the mystical. I can live with that.

But now the 4th movie comes out and suggests that the Lost Kingdom gods (“depends what your god looks like..”) were actually aliens. Now this is an interesting premise but wait, in 2 movies we asserted the primacy of YHWH or Jehova and Christ, and now you’re proposing a material, scientific intelligence that is so advanced it is indistinguishable from God. Again shades of A.C. Clarke: “Any sufficiently advanced technology is indistinguishable from magic”.

So now we’re back to the great philosophical problem: The Problem of Evil.

If there is a God, why would He allow interspatial beings to wage war on hapless Earthlings. Does He not care? Are the aliens his preferred species?

As long as all higher intelligence was mystical the series was insulated from this criticism; but now that the power is scientific it’s totally hosed.

And, let’s ask, what would happen if the humans were to have the Ark with them. Would the power of the Ark ( i.e. the Judaic God ) be sufficient to kill the aliens? Can you even imagine, the ghostly dead Jewish souls writhing against an interspatial being. Who would win? How many angels can dance on a pinhead? Can on omnipowerful god create something so powerful he couldn’t lift it or would He vanish in a puff of non-contradictory smoke?

It’s enough to make atheism look like the only sane option.

Rip off “Stargate”. Suggest that all human religion, and that all artifacts of power ( i.e. Grail and Ark ) were actually alien technology. The ark was a special technological condenser which used decomposed human body as a conductive surface; the grail was actually a cup with certain metallurgical properties such that when used with artesian water from the well in that desert redoubt created a free-radical nullifying field because deep below was an alien energy source, etc.

Basically, the mystical “God” plotlines are interwoved and suborned under “Aliens were here and have been defining our culture since the dawn of antiquity”.

Topic 3: “Their treasure was Knowledge”

In the ABC after-school special worthy denoument Indy says that to the Kingdom-ers “knowledge was treasure” (stay in school, kids!). But that is disingenuous in the extreme in this series.

If anything Indy’s adventures assert that knowing is good, but knowing a bit too much is lethal. Mixed messages there, Lucas. It’s not even consistent within the same movie. We have Indy at one point admonishing the student to go into the field to study archeology, but at the same moment he decides that are some Things that Man Is Not Meant To Know.

Allow me to quote HP Lovecraft from “The Call of Cthulu”:

The most merciful thing in the world, I think, is the inability of the human mind to correlate all its contents. We live on a placid island of ignorance in the midst of black seas of infinity, and it was not meant that we should voyage far. The sciences, each straining in its own direction, have hitherto harmed us little; but some day the piecing together of dissociated knowledge will open up such terrifying vistas of reality, and of our frightful position therein, that we shall either go mad from the revelation or flee from the light into the peace and safety of a new dark age

Come to think of it…

“Creature from the interstices between dimensions” : aka Lovecraft’s “The Shadow out of Time”

And, meanwhile, the Great Race itself waxed well-nigh omniscient, and turned to the task of setting up exchanges with the minds of other planets, and of exploring their pasts and futures. It sought likewise to fathom the past years and origin of that black, aeon-dead orb in far space whence its own mental heritage had come - for the mind of the Great Race was older than its bodily form.

Knowledge leading to awaking a latent, malevolent, alien, consciousness : aka Lovecraft’s “The Call of Cthulu”. See above, and….

Cthulhu still lives, too, I suppose, again in that chasm of stone which has shielded him since the sun was young. His accursed city is sunken once more, for the Vigilant sailed over the spot after the April storm; but his ministers on earth still bellow and prance and slay around idol-capped monoliths in lonely places. He must have been trapped by the sinking whilst within his black abyss, or else the world would by now be screaming with fright and frenzy. Who knows the end? What has risen may sink, and what has sunk may rise. Loathsomeness waits and dreams in the deep, and decay spreads over the tottering cities of men. A time will come - but I must not and cannot think! Let me pray that, if I do not survive this manuscript, my executors may put caution before audacity and see that it meets no other eye.

In the movie we accept that Roswell happened, that aliens came and were hushed up by the Feds. Inside their heads were highly magnetic skulls. Therefore Roswell Alien == Crystal Skull alien. Roswell Alien has spaceship

You mean to tell me that at no-time in the pre-RADAR era an alien wasn’t able to find the missing skull, hop into the UFO, and cruise back to the hidden kingdom unleashing Ragnarok. Why not?