The League of Melbotis did a 10 point listing of ladies of the 90’s media he “once dug”. For the record, when men are left alone, they pretty much do this as their primary hobby of choice. Frequently sports is used as subterfuge so that we can have some space in which to play this game, but essentially, it’s the national pasttime.

Dana Scully: Hot, Red Haired, Didn’t mind finding Mulder’s uh, “videos” on occasion. A babe who gave hope to those of us at home on Friday night watching X-Files and dialing BBS’. As I noted on The League’s site, Ms. Anderson is a very un-compelling interviewee - heck that guy that made the beer-catapulting robot was a more coherent interview, or even Madonna in the “you don’t pee-pee in the shower” bit.

Nevertheless, Seasons 2 and 3 right as “the mythos” got going were very, very awesome.

Eh. I liked her in Max Hedroom, but that’s mostly because of her clean, crisp diction.

Not so hot in the 90’s, more hot in the naughts, but I see where he’s going and I’ll never say a word against a woman whose pinky is a registered implement of death.

Eh, a wise-cracking moll is always kinda hot, but…hotter in the naughts. And what’s up with her hair! She stole it from Flat-Top. 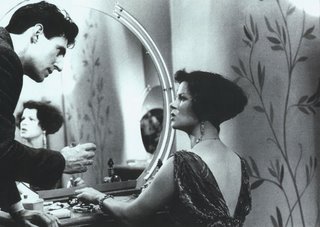 As I’ve mentioned Madonna and Flattop in one entry, I saw an interview with Madonna where she said that it was hard for her to “act” (quotes mine) in Dick Tracy because her role required her to give a “bad performance”, something she simply couldn’t do naturally. Hubris, pure hubris.

In edition two, The League kicked it up a notch.

The year was 1989. Batman came out. My friend Matt’s parents were into “Twin Peaks”. I saw Sherilyn Fenn. While the NES Advantage had a great deal of my attention, Ms. Fenn was hot like sweaters and bobby-socks hot, in a way that would presage my affection for the girls of Thee Parkside in San Francisco with Betty Page cuts, and Betty Page in general.

Hot, sweaters, and longer skirts with a mischievous twinkle. Fenn-tastic!

Something about the saddle Oxfords and Badlamenti’s orchestrations chasing a character about that make her much hotter. Speaking of…

Eh. Like I said, the strains of Badlamenti following you about can’t hurt. I see where the League was going with this whole rough and fast thing ( a la Hamilton in Terminator 2 ), but….

I was way into The Breeders and The Pixies, the Breeders more so. I dug “Cannonball” and “Divine Hammer”, I’m sorry for inflicting that so much on The Social B. The interesting part about Kim is her sister Kelly who was also in the band. While I’m no Bud Light “..and twins” kinda guy, The Deals both had a full house in the guitar talent department and drug abuse department.

In any case, Kim is sorta like that girl in your math class who one day off-handedly says “Yeah my bass needs a tune up some dude knocked it over at Zelda’s the other night…” and then you find out she can play “Debaser” and you’re like. Wow, “all this time I thought you were just marking time until graduation like me, but you were doing something much cooler than I was, i shoulda asked you out before i was all intimidated”.

Seeing “True Romance” was a revelation for me. It was to launch the ship called Quentin Tarantino ( sale of this movie’s rights financed “Pulp Fiction”). It was funny, it had Val Kilmer as Elvis, a stunning tete-a-tete between master of the craft Gary Oldman and Christian Slater and…well…a hot, sassy, and voluptuous hooker named Alabama who “tasted like a peach” ( confirmed by two generations of Whorley ).

And what about the Walken / Hopper discourse about Sicilians? Man that was IN-TENSE.

And I never looked at phone booths the same way again.

She’s one of the greatest artists ever. Knowing her increases your odds by 100% of being mopey, British, and wealthy in 2008.

She’s a relentless artist, never gave up anything for who she was, has a great smile and, despite the look, you just know she abides by that one for the kettle rule of making tea, she’s that British, OK?