Well the 7th marked the 5th year of my running a site. Isn’t that thrilling? It’s been a chore sometimes, my only tendril to sanity others, and a great place to store ideas, sketches, and things that I’ve discovered along the way.

Better yet are those who I discovered: The League and the missus, other friends, family and passers-by of their way.

Sometimes it’s also been a way to keep my California friends and folks aware of what was going on with me out there in the middle of our continent.

I’ve shared pictures and code and rants and raves. I even urged my girlfriend to get a site which she has designed into an ordered, pristine beauty.

According to Wordpress I’ve written 1013 entries. That’s about 200 entries a year. Yikes.

But it also is the season of the marking of my trip around old Sol and it was a really wonderful occasion this year. Lauren surprised me by keeping me in the dark as to what would happen.

Saturday we slept in ( mel-a-to-nin, hell yes ) and I was woken up with Lauren’s fabulous fritatta. It is, how you say, so tasty. Creamed spinach, cream, eggs, mushrooms, and a secret blend of spicy kick makes you say “ow” and “mm” simultaneously. I’m glad Lauren’s tastebuds warmed up to Texas chile-friendly cookin’.

Lauren baked through most of the day but she had arranged for oh so many of my friends to come and meet us at Threadgills that evening. Present were:

The Garcias. Alfredo, who has always had the skill of being a master of costume, stentorian oration, and croquet and his lovely wife made it. While my dancing obligation and their trivia mania keeps us apart, it was great to see them.

Juan G. et Letitia who tolerates my abysmal French. Juan’s iPhone shredded cheese and made the photos that Lauren made into a photomontage ( see below ). Letty is also the only person who wished me « bon anniversaire », and that’s special :)

Juan D. who is one cool cat. I had recently learned about Juan’s mastery of synthesizers from the lamentably-absent Nicole ( who was in a cave, working out that “Tom Sawyer” solo ). I never have a chance to speak with him as long as I wish because I’m either quickly heading down in a spiral of Crown Royal or there’s just too much going on. We actually did get to talk a bit of e-music and I can certainly imagine him having been a good teacher of synthesizer theory.

I also believe I may have called him “Mr. Garcia” upon the conclusion of the evening. I woke Sunday morning thinking “did I call Juan by the wrong surname?” Juan, if you remember, which I clearly don’t ( Margarita Fail!), and I did the wrong way, sorry about that.

The Melbotises were both there, of course, with a family theme enhanced by the presence of League-brother and legal eagle Steanso.

Making my birthday even more festive was the fact that my friend Trevor’s music career appears to be in a really exciting nascent state. Now, mark you well, he’s been working for a great many years in that luxuriously beautiful study of his where only his iMac and the stillness of 5 ante meridien cup his creative daemon–but the world seems to be opening up thanks to a recent performance in that city of the avant garde artist, Berlin.

Trevor also took the time to consider my research proposal theses which he basically said were crap ( but in a very nice fashion ) and offered to help me refine other lines of questioning. Academic life is riddled with such challenges in pursuit of truth, so I’m thankful for his feedback and his offer to read future suggestions. I really feel like all my friends are really supportive of my school idea, so thank you. I shall be very sad to tell you all of my non-prospects in but a few months.

And last in the order, but first in the parking lot, was Matt who also started the trend of giving me bottles of red wine. This action was echoed by Jason as well as the Garcias. Thank you all for such gifts. Apparently the red-skinned grape has some kooky molecule in it that makes you live longer, and I like the idea of that, so thanks.

Incidentally, Nicole, there was a cupcake that went home with Matt for you. I’m not saying you’re going to get it, but it was sent.

Also I must thank The League et uxor for their gift of literature. While my reading these a days usually finds punctuation in “(A) is greater, (B) is greater, (C) the quantities are equal, or (D) cannot be determined”, one day I will get back to books that involve sentiments. Although before the festivities I got to read “The Killing Joke” which had been lent to Lauren and I remembered how interesting ( and terribly, terribly gruesome ) it is. DC really had it going on back in that era: Alan Moore, Neil Gaiman, and Frank Miller all pushing the craft forward ( Ryan has some great thoughts on how The Dark Knight basically pulled a “Dark Knight Returns” on the superhero movie industry ).

So thank you, thank you all so much for coming out. But in a world where schedules are so variable, and it’s so rare for a birthday to actually fall on a Saturday, I must thank the person who tirelessly herded all the kittens: my friend, my true love, my wonderful girlfriend, Lauren.

I admit, I wasn’t that hot on the idea of a birthday this year. 31 seems kinda the sucks. Lauren insisted. I said “OK, whatever” but she turned it into something really special. A great big thanks is owed to her because not only did she do all the arranging: she also baked the finest deserts imaginable: Chocolate Satin Icing Cupcakes and cherry pie. To say what Lauren made were “cupcakes” is liking saying a Rothko is “a painting”. They were spectacular and her cherry pie, made with delicious, fresh cherries delivered a tart-sweet one-two punch.

The entire event was marked by my recent obsession with love of “WallE” and even my WallE and EVE figurines made an appearance ( see video, below ). 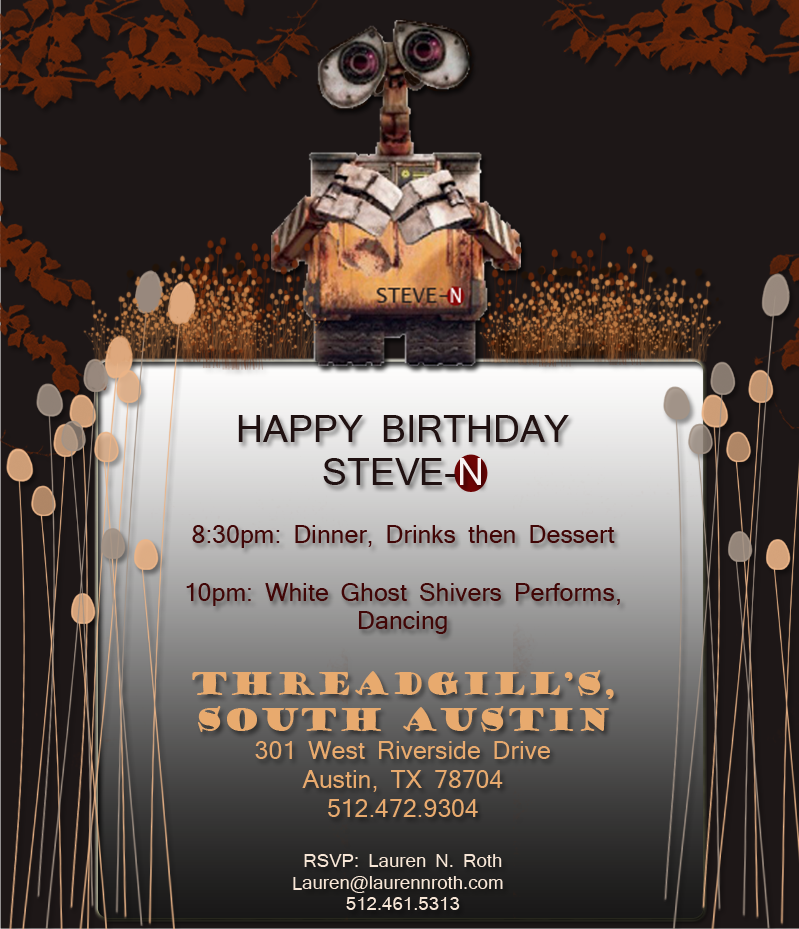 The cuisine at Threadgills was steaky, fried, cheesy Texas heart-attack fare. It was delicious.

At the end of festivities, we bade farewell to our guests and headed over to check out the “White Ghost Shivers” who were playing at the outdoor pavilion. WGS are a downright ribald “hot string” / ragtime band. Their favorite song topics usually involve: hooch, stickiest of the icky, women of questionable morals, entendres, silliness, The Charleston, and waking up in strange places with strange people. Match this with slide whistles, banjos, clarinets, the occasional ukelele, and some devil-summoning fiddle work, you have a great musical time.

We made it out to the dance, er, field, and tried to keep up. A bit of Balboa on the fast songs, a bit of lindy-hop on the slow, we managed to kick up some dust and enjoy the show in a new way.

We drove back home and as we crossed the 183 split the clock turned past midnight, a birth-day was done.