When I started1 college I was monolingual ( if you don’t count public-school Spanish ). By graduation I was exceedingly comfortable with Dutch and French2. These studies, along the way, showed me the wider possibilities of the expression in my native tongue and, as such, I feel as though I lost the sense of the original linguistic constraints of my class, culture, and region. In some ways, it made it harder for me to speak my native tongue.

Allow me to explain. 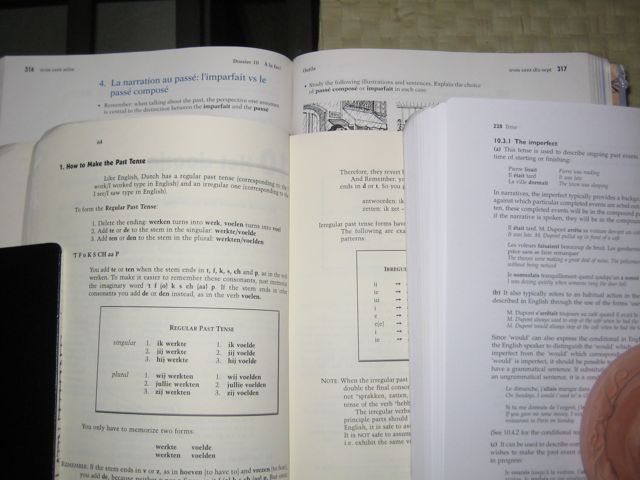 You see, the first language I really mastered was a Germanic one that maintains some legacy structures which are permissible in modern English, but which are either anachronistic, or, at the very least, unusual, to the modern ear. I’m not sure how second ( and third, or fourth ) language acquisition remaps synaptic paths, but things that didn’t pass my “acceptable English” filter before Dutch did pass after.

I think that the apple is red

In Dutch, and other Germanic languages, after a relative pronoun ( “that / dat” ) one has the permission to stack all the verbs at the end of the clause3. Thus, a literal English translation would be:

I think that the apple red is

Now here’s the thing, this utterance is not wrong, rather it’s merely quirky, odd, but legitimately comprehensible4.

Now to a more complex example. One idea that became legitimate for me post-1998 was that both “to be” and “to have” were legitimate auxiliary verbs for making the past-perfect.

That is, in traditional English I would say:

I have come to Amsterdam to view Golden-Age paintings.

I am come to Amsterdam in order to see Golden-Age paintings.

Having been interested in the history of the Manhattan Project since 4th grade, I certainly knew J. Robert Oppenheimer’s alleged translation of the Bhagavad-Gita:

Behold, I am become Death, the destroyer of worlds

Or, having a traditional Christian upbringing:

Joy to the world the lord is come.

“Ah-hah”, thought I, “it appears that somewhere the use of ’to have’ overtook ’to be’ as the auxiliary term for verbs.” Dutch, which shares an approximate common ancestor with English around the time of Chaucer, seems to have preserved something we English-speakers have removed.

I came to Paris to visit Shakespeare’s bookstore.

I am come to Paris to visit the bookstore, Shakespeare’s.

Hm, so here we are with French, the other influential parent in English’s family tree, asserting that forms of “to be” are legitimate helping verbs.

Now, what can we note among the French and Dutch verbs that use “to be” as the helping verb?

Dutch: To be, to become, to burst, to be startled…

Answer: These words seem to have a tendency to be intransitive; that is, they cannot take a direct object. Surely there are exceptions, but this seemed like a good hunch to base my research on.

Via Grammar Girl5 I found this citation by The Mavens.

This legitimate, but now archaic usage is known as: the “resultative form.”

As stated at The Mavens:

An Historical Syntax of the English Language says that the change from the type “he is arrived” to “he has arrived” may have been partly due to the identical pronunciation of is and has, reflected in the contracted spelling ’s, found even in Shakespeare’s time: “I’m glad he’s come” (The Taming of the Shrew).6

Learning these languages, and most definitely Latin which influenced scholarly writing in both linguistic communities, has made me love the subjunctive and given me the tendency to pepper my expression with seeming anachronisms, but it’s really just that my English syntax filter was made a bit more malleable than is usual.

Knowing where English can be bent to allow these subtle and fine archaic constructs occasionally makes my expression a bit sharper to the ear and, given that these constructs are so heavily used in the legal and religious communities, can quickly whip the ear of a listener to attention without the listener even knowing it7.

I feel that learning the languages of others gave me new tools for understanding the mental constructs that frame the realities of those speakers. Experiencing this is an epiphany of the liberal arts education and is as fundamentally mind-blowing as a hallucinogen.8

2: My mastery of both Dutch and French have suffered from disuse and Latin muddling their compartments.

3: There are some variations for prepositional phrases, but let’s keep the matter simple.