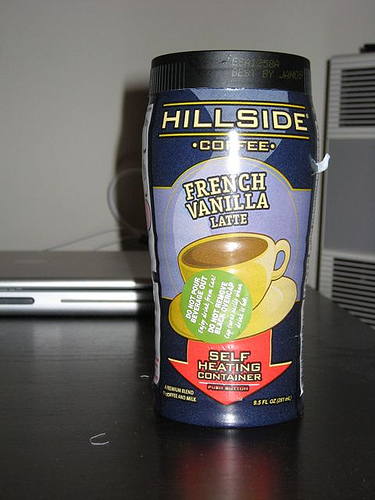 During SXSW my house-guest, wired up on too much of the highest points of the Web 2.0 society and jet-lag, graciously headed over to Wal-Mart to buy some basics as his luggage had gotten misplaced by American Airlines; one’s pickings are slim, mind you, at 3 in the morning.

Part of the booty that was left behind by said guest was an exemplar of the all in one coffee-making cup. Being a daring sort, I drank it upon his departure.

The first element to note is that this thing is heavy: comaprable to a Slim Fast can in density. You might be needing a trip to the ER were this thing to fall an your foot.

The real magic ( or science ) of the device is that by puncturing some liquid bladder on the bottom ( I can feel your desire growing here ) you begin an exothermic chemical reaction that warms your slim-fast coffee right up. I admit it, I drank it, and it was about as good as the stuff in my office break-room.

But what really struck me is that the thing was still tarsal-damagingly heavy after consumption of the liquid payload. I have checked out their site which re-assures me that our reaction only produces natural bi-products [sic].

I just hope everyone drinking these is putting them in the recycling bins.

I found a dissection of a out-of-date can can as well.