Several weeks ago I was visiting Ironic Sans and noticed David, the proprietor had written this comment about a kerning error: 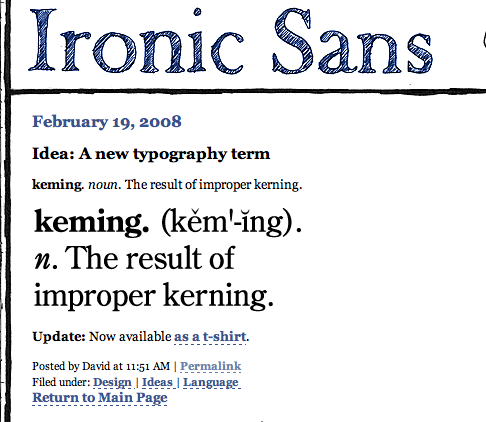 I thought it was a hilarious observation and went so far to buy the t-shirt.

And thus was my relation with keming. Then, the other day, while on a call with some service operator or another I was, in the custom of such operators, over-politely subjected to my surname being repeatedly mangled as I was called “Mr. Hams”.

It then struck me, that it was not the general deplorable state of American education, it might have been the typeface that was to blame, for you see, the poor operator may have been the victim of a tiny serifed font turning my familial name from a descendant of Hermann into a titan of hog rumps. In short, I believe my last name may have been kemed.