I love the way the opinion writers are examining the fall of the Bush presidency in these grand Greek tragedy arcs.

Maureen Dowd of the New York Times sees the theme of a spoiled son of privilege wrecking Daddy’s Porsche:.

Poppy Bush and James Baker gave Sonny the presidency to play with and he broke it. So now they’re taking it back.

They are dragging W. away from those reckless older guys who have been such a bad influence and getting him some new minders who are a lot more practical.

I see much more the theme of the sorcerer’s apprentice. 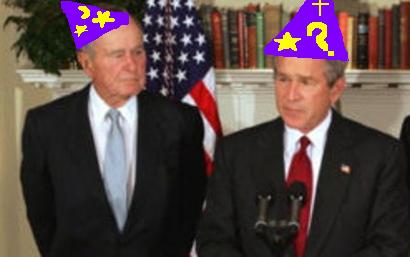 George, The Junior Wizard, a fictional imagining of The White House

The unworthy acolyte, full of bluster and best intentions steals daddy’s magic wand and thinks “I’ll best his work (a very Satanic impulse isn’t it?), I’ll get a second term and I’ll change that there Iraq better’n Poppy did!”

With sound and fury he pulls upon the powerful machinery of alchemy or Office of State. The lightning falls, the thunder bellows, the shock and awe. The dogs are unleashed hungry upon the desert and the battle goes well. But the peace, it turns into, what LBJ called, that ugly bitch. Mickey The Apprentice runs and finds himself scared, lost, and confused when Sunni brooms start dumping buckets of GI blood all over the place. Oddly that river runs down through the Mesopotamian sands alongside the Acheron and bubbles up in the lives of Middle America.

And the neighborhood kids, so impressed by the feat of this arcana are now scared, because the brooms won’t stop dumping!

Dickie from Montana street is gone.

“Condi where are you?” a hollow voice stammers over the plush carpets of the Oval Office.

Little Donny’s feet peek out from behind drapes in the behind the desk.

“Tenet, I gave you a freedom medal buddy for broken intelligence where are you?”

… The sloshing continues bucket by bucket.

We can see the wizard’s cap on 41’s head bedecked with moons and stars. A flowing beard and purple robes move in a flash to steal back the wand summoning Scowcroft, Baker, and Gates, but lo, they’re in a deep sleep and must be awakened. He looks at the apprentice and utters the words: “You know the rule of equivalent exchange in alchemy, son”. Sonny points behind the drapes where little Rummy was hiding. In a bit of black alchemy, political sacrifice is given to awaken the elders.

For political station is the only sacrifice sufficient to make the ultimate alchemical gamble: transmuting legacies of lead shit to gold.

Emerging from their slumbers the men throw back their alchemickal cloaks to reveal Brooks Brothers suits.

“Yon Gates, take control of The Department of Defense.”

[ The Laugh Track Plays and the audience claps while the credits roll in that big-friendly Three’s Company typeface ].

This whole Oedipal / Freudian / Greek thing is exactly what Gore Vidal expected would come to Bush sooner or later: that other Greek word: hubris.

Apparently Newsweek’s new press run has the title: “Father Knows Best”. This has got to really smart for W.