Friday night Lauren and I, after dinner at EZ’s, headed down to our favorite local bookstore BookPeople. I picked up Hellboy v.1 and on the way out scored some cool A Scanner Darkly schwag and noticed the following flyer for the Flat Track Invasion as presented by the Texas rollergirls.

The flyer sat on our kitchen table the next day, but come Sunday midday, we thought that it might be a lot of fun to go and check out the demonstration. I must say that I was partly inspired to go through with attendance thanks to the League of Melbotis’ advocacy of his hometown girls.

We headed up there around 7 and, after having waited in line a good bit, had a chance to go in and check out this cult sport in person.

Let me say that I absolutely loved it. It was a really good time. There were some elements of “Gorgeous Ladies of Wrestling” : camp, theatre, drama, assumed names, and girl-on-girl violence at high speeds.

The first bout we caught was between the Hell Mary’s and the Carolina Rollergirls. It was a hard fought battle, but towards the end of the match, the Carolina offense proved too strong and the Mary’s started giving up 11-point jams one after another. This set up quite a gigantic gulf for the Mary’s to overcome in the next period of play.

That pair off the rink, the Hotrod Honeys took on the Dairyland Dolls. It was then that my rollerderby heart was stolen by #3e8, Rice Rocket. Rice’s skill at moving through the pack was amazing. She took the curved part of the loop so aggressively that it looked like she was cutting a rectangle in her jam. She was a totally fast, aggressive, and badass jammer.

I also really liked the work of Cat Tastrophe. On the Mary’s we liked Captain Bloody Mary and Misty Meaner.

{ I feel a bit bad for gushing on the jammers, that’s kinda like the undue publicity quarterbacks get in relative terms to their offensive and defensive line. I’ll have to pay more attention to the finer subtlety of defense and offense next time I go. }

In any case, the opening period against the Dairyland Dolls and the Hotrod honey’s was incredibly low scoring. I think that the score stood 6 to 8, favoring the dolls at the end of the period. It must have been a grueling outing for the girls.

Then was halftime, and Ghostland Observatory played. They were a really good act: electronica and, uh, soul? A lot of the vocalistics followed the spirit of Jack White (more as in the Raconteurs versus the White Stripes) with some elements of Kraftwerk layered underneath. Did I mention that an evil laboratory overlord cape was worn, complete with neck cowl?

The first two periods of play past, the girls resumed their mayhem. The Marys were regrettable unable to hold off the crushing power of Carolina who disrespected the Marys in their own house. It was out of frustration of an agonizing loss that the nasty side of the girls lashed out, including a bit of final second bashing delivered around turn two: 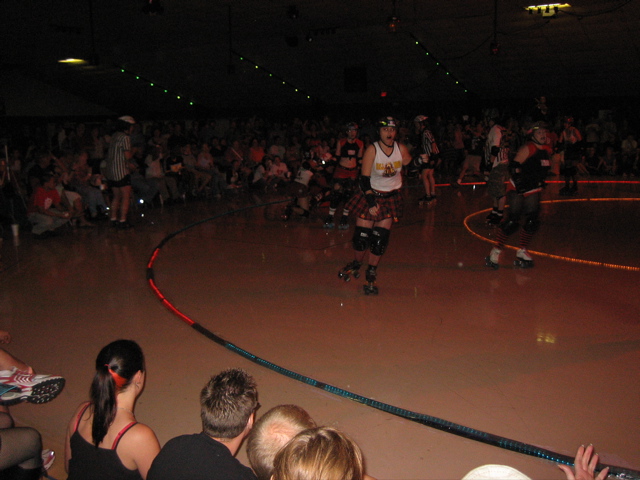 The last round of play was again a loss for the Texas teams as the Dairyland Dolls finished off my dear Hotrod Honeys. While the score stayed low and the skating was instense, our greasy homegirls lost an angry battle.

Afterwards there was an afterparty at Buffalo Billiards. We hung around a bit on couches so nasty they’re not fit for canine comfort before the ravenouse rollergirls showed up, gulped down their buffet and started pushing back the beers. I did get a chance to gush to Rice’s face about how awesome I thought she was and how I thought the loss was a tough break (or maybe I’m not remembering things as clearly as I could…).