When involved in the Ruby frequently one hears things about how great the job market for Ruby programmers is. It is great – especially when compared with the stagnation in other markets, regions, and disciplines. Recruiters bombard the Meetup groups, attend the meetups, show up at hackathons, and contact you via LinkedIn. It’s nice. 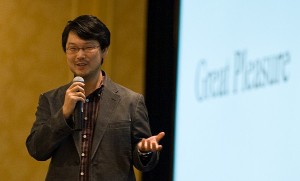 Given the numbers of Ruby jobs, or, “opportunities,” I frequently see other Rubyists touting happiness in the job as the ne plus ultra of work motivation. The commentary is frequently of the form: “Leave your present situation for a Ruby situation because there is a great quantity of opportunity for Ruby jobs and, let’s face it, if you were to write Ruby all day how could you not be happy?” The happiness-as-virtue-in-extremis is further encouraged since one of the community’s most visible luminaries wrote a wonderful book that described how to have “a remarkable career in software development” and encourages developers to think long and hard about the happiness and peace generated (or not) by their current position.

In sum, Rubyists think it’s pretty darn important to be happy at your work. I’m proud to be part of a community that has “taken the red pill” but some of the commentary promulgated can, betimes, seem a bit insensitive if not naive. Let me say first, nzkoz is not insensitive or callous, but it’s the example that got my gears turning on this topic.

“If you’re a developer doing a job you hate, you are useless or totally doing it wrong. So many people hiring right now…”

There are many good reasons to not leave something you hate (i.e. that which earns you your daily bread) besides being useless or “doing it wrong.” Furthermore this tweet may just oversimplify between the extremes of “like” and “hate.” Make no doubt, I understand the spirit (yes, it was funny!) of the tweet and the 140-character limitation.

I think it would be a a worthy feature-add to this discussion for the brave Rubyists who have followed their bliss to tell the story of the form:

Yes, I left my job at BigCo as a senior developer after 15 years. It was the scariest thing I had done to leave that comfort and to joing RubyRazzle.com, not least of which because my autistic son Jeb requires private education and my eldest daughter, Jenny, required orthodontics after a freak crocodile wrestling accident. While RubyRazzle seemed likely to succeed, there were no guarantees. Heck, while some people were thinking about “Will I use Redis” I was thinking “How much extra is it to get my wife Suzy medical coverage deriving from that skiing accident she had years ago. Obviously, RubyRazzle didn’t have the cash inflow that BigCo had. Less salary, less generous benefits, risk….but on the other hand I couldn’t see that same faded pine-colored carpet again where my chair had worn grooves in without thinking that I had somehow thrown important years of my life away. So on June 12th, I walked out the door of BigCo to a job that gave me a small house worth of options, and a salary 15K smaller…

I believe this is the mental conversation that keeps our fellow Rubyists locked in positions they don’t leave. It’s easy for Paul Graham to grab college grads and stuff them into a loft with a half-dozen MacBooks and create a startup: there’s no lifestyle to lose. But as a recent thread on Hacker News shows, better developers are out of the Ramen-and-IPA phase of life and need to see how they, too, can follow their happy without feeling unduly irresponsible to their spouse and/or children.