I just finished Daniel Everett’s “Don’t Sleep, There are Snakes.” This work records his years spent living among the Pirahã, a small indigenous tribe of living along the Amazon in Brazil. Everett was initially sent among them to convert them to Christianity. The modus operandi of his support organization was to study the target civilization and then give them the New Testament in their native language. Therefore, Everett’s background as a linguist made him an ideal missionary. In the end, however, it was the Pirahã who converted him to atheism. 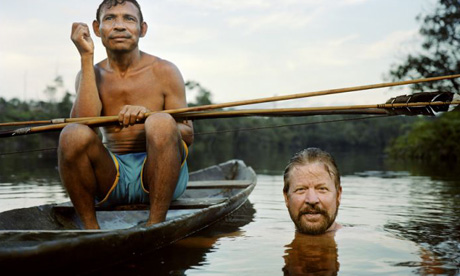 This reminded me of a story told to me by my AP English IV teacher in high school about a peer student who, the day before graduation, renounced his learning, renounced his faith, and left the seminary of Houston Baptist University. I was always struck by this story, about that point on the circle where you loop back around the other way to wherever you started’s anti-pole. To hear of the theme repeated, by a missionary no less, was a yarn I could not ignore.

“Don’t Sleep…” tracks Everett’s travel to the Pirahã village. The opening act covers the culture shock aspects of missionary work. He describes the hardships of life on the Amazon: malaria, caimans (carniverous reptiles who like some human flesh), anacondas, and a riverside-dwelling people who had, in the early stages, little compunction about killing him and his family when he threatened their access to the sugary liquor used as payment by riverside traders.

I classify this as travelogue. It’s fascinating, interesting, and ultimately paints the picture of a happy, clever, naughty, and loving people whose adaptation to their environment is a marvel to learn about.

An important finding in his study is that Everett discovers that Pirahã have an immediate experience bias. Simply, the Pirahã don’t talk about that which they have not experienced or which someone they know has not experienced. This extends into their language in fascinating directions: they don’t have terms for extended ancestors or those individuals' beliefs, nor do they credit third-party knowledge. This bias as a taboo has completely shaped their world-view such that there is an immediacy to all utterance.

A simple point whereby to grasp the pervasivness of this taboo is that the Pirahã do not use relative clauses or indirect discourse (related linguistic concepts).

Consider: “Julia thinks he is happy” or in Latin, “Julia putat eum beatum esse,” or Dutch “Julia denkt dat hij gelukkig is.” In each of these languages something happens in that “what Julia thinks” bit. Latin changes the “He” to become “him” (“is / he” -> “eum / him”). Dutch inverts the regular verb order to push the verb to the end (“is” / “is”). In each of these cases something that cannot be directly interfaced with is encapsulated by Julia’s reckoning of it. This does not happen in Pirahã. The immediacy bias prevents utterances such as this.

Yet the Pirahã say: “He is happy. This is thought. Julia thinks this.” Come to think of it, maybe Hemingway was a Pirahã. There is an immediacy to each of these simple assertions where veracity can be ascertained. This kinda blew my mind. A language without indirection or subordination.

The extent of this bias is also shown in a different context, the Pirahã report things as either things experienced (I saw Bob in a boat fishing), hearsay (The women say Bob is fishing), or deduction (Bob, his bow and arrow, and his boat are gone, I bet he’s fishing).

Everett spends the second half of the book exploring how his research of Pirahã language fits against his profession as a linguist in academia.

I found the most fascinating chapter to be the chapter on recursion (I’m a programmer, what can I say) in the second half and how it was assumed to exist in all languages and to be a primary component of them (per Chomsky, undermined by Pirahã, contends Everett).

But what of what drew me to the story, the missionary converted? In some ways, it’s the logical conclusion of having worked with the Pirahã for thirty years enmeshed in a world with this experiential bias and the language that favors and advances it.

Dan’s translation of his encounter of Jesus is neither direct experience nor deduction, ergo it is would be in the hearsay register (Strike 1). Neither Dan nor his father had seen Jesus (Strike 2). The offer of the missionary was that Jesus was there to make them happy, but they already were happy (Strike 3).

Oh, and the night after they were told about Jesus, he appeared in their settlement, with a three-foot penis and proceeded to menace their women for sex (while they require “immediacy” dreams as well as supernatural beings do have a “real” place in their world! Think about the ramifications of that!). Needless to say the, to use a coined phrase, “come to Jesus” speech was not going the way the missionary planned.

The relevance of religion was absurd to them. Nature had been there, been good to them, as long as anyone could remember. The Pirahã don’t worry (didn’t even have a word for it!), they don’t fret, they don’t fear death, and seem to be completely happy with their lots and their culture where they talk about fishing, trysts, the river, and generally take care of one another.

I’m not about to propose some Rousseauan / Thoreauean paean to the noble savage, but unfettered by fear about a fate which no one has seen they seem very happy, healthy, and free from the decadent forks of ennui and malaise which seem to constantly drive the occidental to Paxil, Reality TV, and church.

Update: Changed “things” to “thinks” per comment by Dev.