Recently released on Netflix is “Playing Shakespeare,” a program that aired on PBS in America in the early 80’s. The series features John Barton, director, and his cast of thespians from the Royal Shakespeare Company. Many of us will recognize X-Men heavyweights Ian McKellen and Patrick Stewart, British luminaries like Judi Dench and Ben Kingsley, as well as a host of other actors of note.

Barton will set up an aspect of performing Shakespeare and call forth the performers to illustrate the concept under discussion. Occasionally other actors of the company toss in observations and methodological notes. In that capacity the actor Alan Howard had come to notice as a particularly reserved if not nebbishly. In his collar and sweater and large brown plastic frames he was almost reminiscent of a mid-career Jarvis Cocker. 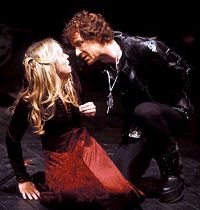 But then Mr. Howard was called forth to demonstrate his solicitation to the widow of his slain enemy, Queen Anne, in the guise of Richard III. Free of smoldering cigarette and spectacles the camera comes in on a tight close-up of another man: his body was crouched, his eyes glinted with malice, and his tonguue turned into a triangle, like an arrow’s point. He hobbled, crab like to his quarry and professed his love.

While this was noticable, the moment of truth is that the lady Anne spits on Richard, square in the face and Howard betrayed no wince, no flinch as her saliva sat fat on his face. Oddly, his eyes seemed to burn slightly brighter, this facial defilement being nothing but a mere annoyance on the hatiching of his plan.

He was stunning to watch.

In any case, the show, thus far, has been a joy to watch and I recommend it.

Let me leave with a review of Howard’s performance in this role:

Alan Howard’s Richard must surely rank among the few truly outstanding interpretations of this fascinating and exacting role seen during the last decade or so.

This Richard, the very epitome of bitter malevolence, heaves and wrestles his twisted body about a dark cavern of a stage, his vicious tongue as sharp and menacing as the dagger that is rarely far from his hand, and with which he points his vicious verbal barbs.

His mind as twisted as the body he so loathes and resents, he weaves his verbal spells around his victims with the cunning of a snake and the devilish impishness of a medieval Quilp.