Recently I rented Tarkovsky’s Solaris, the film based off of Stanislaw Lem’s story of the same title. I was very much moved by the movie and consider it to be one of the finest science fiction movies I have ever seen. I esteem it so because in this science fiction future, humans, and our essential need for emotional contact and connection are so thoroughly explored without being directly mentioned. Further, the movie has some of the best visual tableaux and spatial constructions that I have ever seen.

The movie may not be easy for a Western audience. It has an extremely slow pace, sometimes glacial, sometimes brooding, crosses the 2-hour mark and suffers under the strictures of USSR film budgets. Humorously, the “city of the future” sequence is footage of driving through Japan with “future vehicle” sounds foleyed in. But the patient viewer will find visual richness, narrative complexity, long-take shots, and shall know Tarkovsky to be a true lover of the medium of his creation. 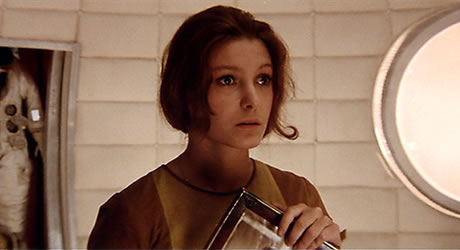 Beautiful and confused, Natalya Bandarchuk plays “Hari.” Here she realizes she is not who she is told she is, but is becoming who she wants to be, almost like a human.

The story opens on Earth – beautiful Earth! – where her greens, her water, her rain, her beautiful animals, her sensuous humanity is set up in long sequences to create a full character, a foil to space, and the sentient planet, Solaris. Here we are introduced to our protagonist, Kris Kelvin, a man burdened by his past, his widowerhood, his cold relationship with his parents, who is to be sent to the Solaris observation station to evaluate whether it ought be decommissioned. Having arrived, Kris finds a disheveled Solaris observation station populated by a bitter scientist, a frightened scientist, a recent suicide, and an inexplicable collection of apparitions: projections from the planet. Understanding the broken men, understanding the alien projections, and trying to understand himself urge Kelvin on a psychological and philosophical journey that attempts to limn the boundaries of what “human” means.

Animating the plot is Lem’s question, “What” if the aliens were fundamentally unlike us, non-anthropomorphic, could not speak, could not relate to us. What if we had only a dark, warped mirror in their consciousness in which to see ourselves? How would we interact with such an intelligence, and what if that intelligence were an ocean? What exactly would we do then? Given the difficulties or flat-out inability to relate to such an Other, Kris’ considerations implode into himself – saving when he discourses with the two other members of the skeleton crew, and the Solaris-produced simulacrum of his late wife – and provide the context for his psychological journey.

The gravitas of the movie is formidable, and the colors, the construction, and its love story – about loss being the only thing that truly makes us appreciate the now – are so rewarding that potential viewers should not be scared away. I recommend you view The Criterion Collection version.

Both Lauren and I were deeply affected by the film for several days and have tried to puzzle out Tarkovsky’s message to us. I hope you take the opportunity to do the same soon.