What a party city!

Now I see why Bostonians are always going on about what a great place Boston is to go out in.

Last night after the conference my boss and I and another colleague headed to Fanueil Hall area of Boston. 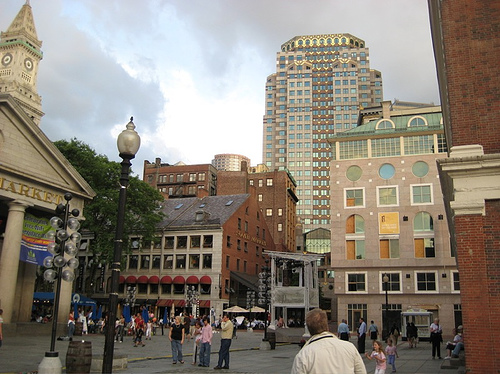 It was kinda like an outdoor mall ( see Stanford Mall ) but set among old colonial buildings ( Ye Olde Brookstone: Thy Pillowtoir since 1668 ). After being given several opportunities to buy tourist schwag we went in hunt of a place to eat.

After walking around in the area we settled on the Bell In Hand tavern on Union Street. 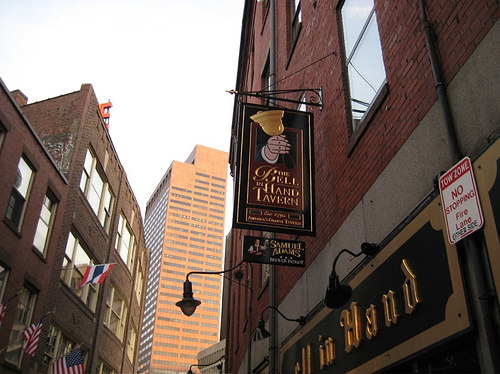 I sampled the local draught, Bell In Hand Ale. It was dark and strong and tasty. The Bell in Hand has the distinction of being the oldest pub in the colonies as well.

Funny to think that bastards in redcoats breeches had tromped about in the alleyways where I stood. Lining Hennessey street were several other pubs.

In this area the pubs generally have glass-front panels which are folded and pushed to the side creating a large, open breezeway that keeps the bar cool and lets the din of music, bottles, and singing waft out into the street.

After a bit of a walk around this area we settled on visiting “The Tap”, which Yelp! seems to regard as an “OK bar for out of towners to get a bit of the Boston bar experience”. Lured to it by the sound of live, acoustic music, we went in and grabbed seats at the bar.

Now, if you read the Yelp! reviews, many of them make reference to a guy with an acoustic guitar….well he was there and this gentleman is known by the monniker of Bruce Jacques. Bruce is a rubber-faced, frenetic, comedian-musician who plays covers often with props or costumes that gets the crowd laughing.

A few songs in, plain musician Bruce changed into the ringleader / circus show that was to dominate the rest of the evening. Noting some men coming down the street with a bundle from Mike’s Bakery, he jumped through the window portal, microphone-in-hand and, still singing, worked in a request for cannoli which - to my surprise - he got! 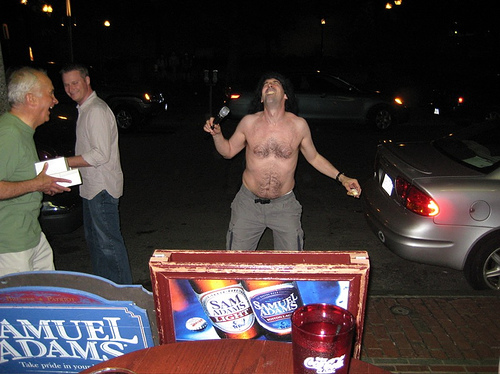 Shirtless, Bruce bit the cannoli, and then proceeded to paint his nipples in cream filling much to the bar’s amusement and the young cuties’ embarrassment. After teasing them ( what young studentette can resist a bald hairy man with filling on his chest? ) he stepped on their table, stole one of the girls’ beer, and proceeded to gulp it down, and then ran back to the stage.

With these antics a few passers-by were ready to come in for a drink and see some more antics. Within 30 minutes Bruce turned the pub from a few dozen people idly watching the Sox close in on victory ( Spanked Atlanta, horribly ) to a body-packed bar of chaos. The virtuous crowd-attraction cycle continued until tons of young girls, salryguys, tourists, some locals started to fill the space. 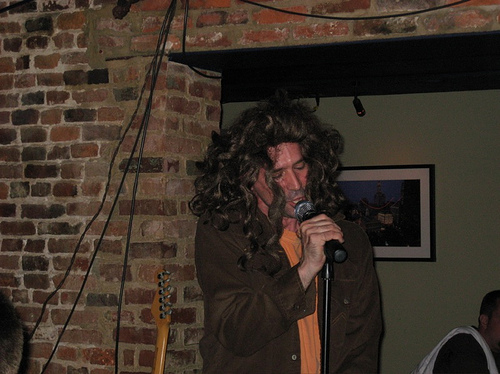 I love Bostonians. They were so fun and so relaxed. The singing was loud and raucous, unrestrained and blissful. These were people out to have a good time.

And I learnt an Irish tune: “Wild Rover” whose chorus involves clapping and involvement from the audience.

And I swear the bar was literally moving side to side during this tune.

From this point on the night falls hazily into trading gifts of Jagermeister, beers, talking about where we were from and what the “good bahs ahh” in San Francisco. This friendliness makes me think that this is how “everyone’s Irish on St. Patty’s day” - there’s a friendliness and an openness that everyone is entitled to the right to sing, drink, and have a good time with good friends.

If you’re interested in my un-scientific theory on happiness and the fuller-figure of Boston girls, you may want to see more below.

We left before closing time, but it was an excellent evening. There is but only a certain amount of sloshed beer that one can take in a given night.

Thanks for making Boston feel like home for one night for this tourist.

The Boston bar culture as compared to the antiseptically healthy and health-obsessed society of privileged Southern California I visited last week it was quite a shift.

The LA region is a hard thing to generalize. Upland is very different than Cerritos, Irvine versus El Segundo, etc. Nevertheless, the health food, exercise, tan, designer-dressed people there - I don’t think they’re really happy. I think they’re healthy, and they look good, but they’re not truly happy. I’m sure that’s some people’s idea of happiness, but I didn’t get a feeling of exuberant bliss there, ever. And don’t laugh too hard NorCal, I didn’t catch that vibe from you either.

I was looking for the reason of this amongst the bar goers, particularly among the ladies and then it hit me why they looked so happy and cheery. They had, wait for it, fat on their bodies! Can you believe it, I couldn’t see clavicle! How shocking! They looked ruddy and their skin had some thickness: it wasn’t doing yoga to stretch across their crania.