Vanity Fair allows you, yes you!, to take a walk on the Sheen side by playing Mad Libs as the poetic and fierce Mr. Sheen. Here’s what my imagination turned up. 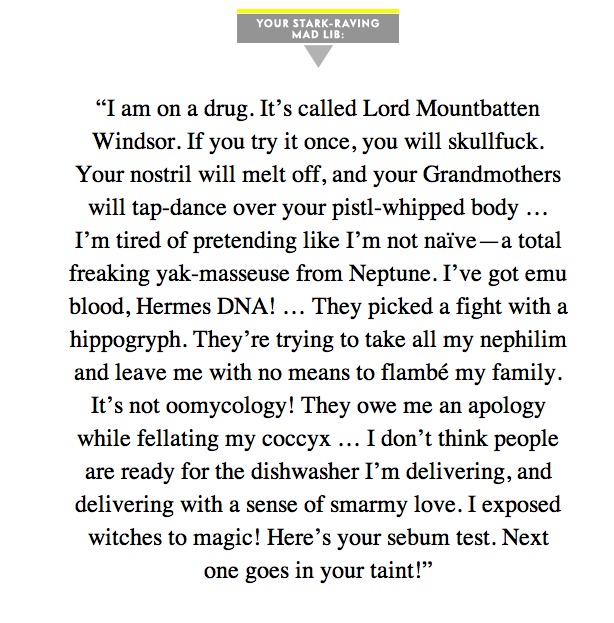 I’m going to go out there and say it, I’m loving Mr. Sheen’s zone. If he is, as he says, drug free and enjoying the fabulous life he has created for himself, who are we to judge – provided children are safe, firearms are not brandished, cars are not driven? His father did some of his most amazing work while on all sorts of yaks-blood while in the Philippines filming Apocalypse Now. Maybe tottering on the edge of unstable is where Sheen men commune with their muse.

And I have to admit, while I was not thrilled by the 2000 presidential results, I had an optimism for what sorts of malapropisms and neologisms it would create (that thrill was short lived, first Elian Gonzales, then trickle-down economics, and then 2001 anno domini). Sheen’s own poetic Irish blood seems to be frothing forth in a foment of fecundity: “…fire-breathing fists,” “tiger blood.” I hope that he continues to let this diamond keep on shining.

I hope he’s well, and if he’s not I hope he can find help. But in the meantime, I’m going to accept that this is a man in the public eye giving us a very real crash course in a mans pursuit of sua amor fati, his Thanatos.