I’ve never been much of a comics fan, but I do have fond memories of Lynda Carter, pre contact lens ads, being a strong, fierce and mean scourge upon the rough streets. Sure, a tight bun and Sally Jesse Raphael glasses with chic McCalls-approved businesswear might seem to suggest her “merely” as an upwardly mobile lady breaking though old, sexist perceptions and glass ceilings, but in addition to that, she was a mean crime fighter.

Not even girls want to be girls so long as our feminine archetype lacks force, strength, and power. Not wanting to be girls, they don’t want to be tender, submissive, peace-loving as good women are. Women’s strong qualities have become despised because of their weakness. The obvious remedy is to create a feminine character with all the strength of Superman plus all the allure of a good and beautiful woman.

These were the words of Wonder Woman’s creator, William Moulton Marston. Well Mr. Marston’s social experiment worked. Via comics, a whole generation, including me, learned of powerful ladies and to think nothing special of it. 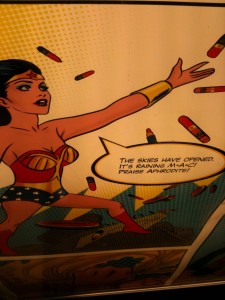 Personally, I think this image must have Marston rolling over in his grave. If Wonder Woman were around today, do we doubt that she’d be doing anything but loading up the invisble plane with physics books for young girls in Kabul? Wouldn’t she be out loading editorial boards on magazines so that instead of yet another “please your man in bed article” they would write about “discover who your man really is?” Wouldn’t she be lassoing up crooked CEO’s? Apparently the worst fate that can befall a girl is to look modishly chic like Helen from Ladytron. 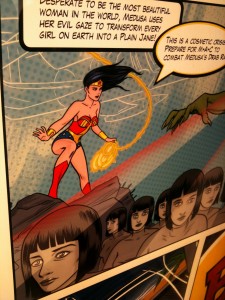 Which, as a Ladytron, and uhm, Helen fan, I don’t find the worst fate that could befall a lady. 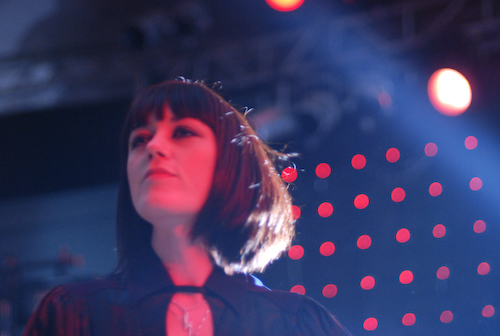 Hm, looking modish and/or wearing a re-do of a Nehru suit, this is a fate worse than being turned to stone?

It was all such a deviation from the backbone and sexual strength that Wonder Woman is supposed to project, it just made me sad.