Yesterday’s post looks a little incoherent with a day of rest between it and I. Based on the entreaty of Mr. Graitcer in the comments, I thought that perhaps I could try to characterize what it is to be fatigued in this way.

First, let’s just say that it’s not the expectation of the teacher or the class curriculum that you work yourself into fatigue of this type. It’s not necessary or required. Yet in both of the BNR classes I’ve taken, the students worked late into the night on their own projects, or improving the assignments.

Therefore, the motivation to work to this level of fatigue is not extrinsic, it is clearly intrinsic. This is, clearly, the more cruel mistress. In a previous post I spoke of the self-selection implicit in defining the population for BNR classes. I suggested that one of the primary contributing factors in being in the class is having the funds to pay the fee or having a job where the administrators feel that paying such a fee for such a person is a worthy investment. People who have such funds ( if the meritocracy be believed ) or faith of their financial administrators likely get to this position be not being able to simply let it go.

I have worked through weekends at work, on work stuff simply because I could not let it go. I have gone to work early, repeatedly, after a few hours of sleep because the problem stalked me. It wouldn’t let me go, it wouldn’t let me sleep. It was better to be awake, approaching understanding, than to endure fitful sleep under the Damocles sword of the unfound answer’s shadow.[1]

I don’t know it well enough. I don’t understand it well enough, I don’t see how the parts work. Granted this quality among the full rank of attendees, you can see how I would suggest that a startup out of any one of these classes could blow the doors off of any particular problem.[2]

So it’s under this background mentality that you’ll see BNR-class attendees whipping themselves to perform, to create, and realize until deep into the night. Simply put, this is just how we’re wired.

Attendees like to maximize effort. That’s why we’re programmers, we like the force multiplier effect of knowing a programming tool. The reason we’re at this class is because we want help learning something very difficult in the most efficient and deep manner possible. BNR classes deliver this. So much of the work done here can be seen in light of trying to optimize knowledge gained per unit time.

Most of us have attempted to learn the material back in “the real world”, but we couldn’t get the information to ’etch’ deeply enough. Learning this material against deadlines, users, wives, taxes, other obligations was simply too slow or too confusing. If you are a “can’t let it go” person who knows that shortly he’ll have to be back in the real world where he’ll have to let it go and you won’t have access to immediate peer feedback or a guru, you work hard.

Like summer camp, we come, we know it will be hard, but we know, looking back, we’ll be amazed by how much we learned, how much we changed, and we’ll remember the conversations, the food, the hard nights. We’ll remember that we were part of a special community for a brief flicker of time.

And if, to chase to that next eureka, we have to have bleary eyes and catnaps in the conference room, so be it. Damn the torpedoes, I came to learn rails.

So we slurp down cups of rocket fuel, we dose up on small quick munchies, we talk, we think, we code, we edit, we close our eyes and doze and then turn back to it, we take more fuel[3]. At the end of a multi-hour run your sugar crash comes but you have to keep pushing. And sure, you could go back to your bedroom, but the feedback loop outside of Oz is too slow. You see, we have to be good enough to be independent when we leave because, it all likelihood, we will be.

So what’s it like, in the dark of night as we ply away? Well, to set the scene, we’re in a very large conference room with a large projection screen hanging from the front wall. The churn of the heating provides a constant white noise that is overlain with collective symphony of keyboard tapping[4] and occasional double-click.

For the most part it’s fairly quiet, except that there are ‘flexible duos’ merging and separating. These duos emerge when one party wants to discuss an idea or a problem he is describing to the other party. They conversation is usually pretty quiet, but occasionally precipitates a whiteboard session.

The lighting is dim, but not dark. The eyes of the coders in troglodyte mode is respected.

And, of course the half audible curse of ‘fuck’ or ‘damn’ as an execution fails, or even worse, does something you didn’t know about and or didn’t plan for.

The tablecloths that drape the tables are rumpled. There are big reference books from O’Reilly press and the Pragmatic Programmers stacked up, splayed open, or fallen onto the floor. 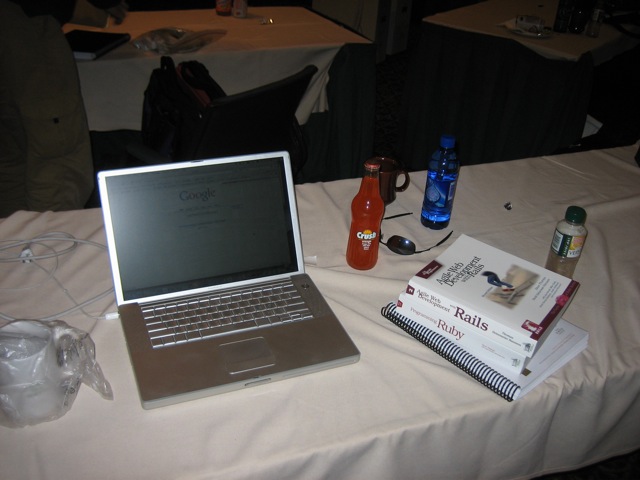 With the dim lighting and the lack of a clock in the room, Vegas-style, you could easily fall through scheduled reality and forget that time is actually passing. Eventually, the time will turn late and that’s when the real fatigue sets in.

There are enough peers present such that your quorum sensing lets you know “It’s OK to stay a bit longer”. Your eyes are dried out from staring at the screen, the typing fingers are sore and tired. The myriad of files you edit get lost, your new enemies are questions like “Where did I just write that thing a second ago?”

You reach the next item on your “to do” list and you attack that problem…and keep on going. In some ways it’s actually invigorating, working on something you care about this much, something that has this much of your love in it. Few things “outside” can hold your interest like this. In some ways, you feel more alive doing this kind of work in this environment that you may have felt at your day job for the last year.

Eventually the discussions between students achieves a sort of level of conversational shorthand. We’ve all been speaking to one another in these highly specialized terms for days and days. We’re all coming from the same reference and our discussions are short, brief, and truncated.

As the evening wears down more stammers work their way into the dialog. The solutions wear down. The bowl full of ice chips melts and the bottles, coffee mugs, and cans on the desk continue to multiply as the diminishing returns on coffee and sugar is reached, crossed, and run over by a distance of several miles.

But eventually you reach your goal and you shuffle back to your hotel room and unwind by watching infomericals or NOVA and then drift off to sleep.

This is the society of the hack, and you’ve done a good day’s work. Sleep is quick and hurried, because the next round of class starts bright and early at nine in the morning.