The last band that truly blew me away were The White Stripes - in the middle of all the same old post-Nirvana blandness out came something Southern (via Detroit), raw, baffling. Furthermore the WS live is an experience is being astounded, Jack White sounds like 3 singers and 2 guitar players.

Today on SF’s 104.9 they played The Dresden Dolls. I know now what it must have been like the first time people heard Iggy Pop. Somewhere the brain circuit between “What the hell is this” and “I hate this” and “This is stunning” all lit up at the same time.

Like Descartes at the opening of Meditation 2, I’m a bit lost all of a sudden, the world makes less sense now. 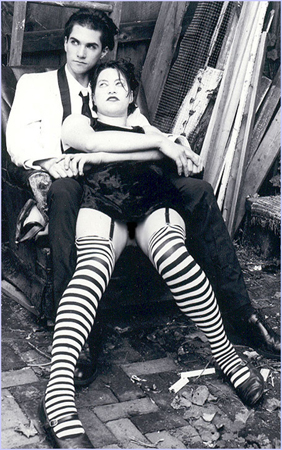 The detritus and the Teutonic that the DDs project really seems to point to a last days in Weimar Berlin kind of asthetic. In any case, it’s been a while since we’ve had good theatre in pop music (besides the disreality of manufactured artists like Ashlee Simpson).