(I wrote this yesterday but neglected to post for lack of internet access, now it is a belated wish)

I should like to take this occasion to wish a happy birthday to my friend Ryan. In this age where Facebook birthday wishes are, albeit pleasantly, the norm, I wanted to take some more time to celebrate Ryan sans Zuckerberg.

Having been in Austin but a few short months before he and his better half joined us in the River City, it was great to make his acquaintance at the Magnolia Café on SoCo one fine brunch. Thanks to his swift purchase of a home, it was more often than not that we were chez lui than chez nous (and the time he did come over he helped us move heavy stuff). For this I would say that Ryan is hospitable. This is not a feature of him alone, but also of his lovely parents who also hosted us before the Radiohead show. I know that a good child is a source of pride unto his or her parents, so for what it’s worth, I think the Steans parents should be quite proud. Oh, and like I said, he helped us move heavy stuff, so it’s worth noting that Ryan is strong and helpful too.

It’s impossible to miss that Ryan’s genetics code for ice-fishing and axe-weilding while laying waste to tundral villages. Thankfully, in modern times, he is a kind sort. He cares very much for those in his life, the human and the non. I belive most men believe that to be A Man (tm) is to swallow stress by the gallon and to nobly support your household through all seasons. I have seen Ryan do this, for his lovely wife as well as for the canines and felines of household. So for these reasons I would call him admirable, manly, and kind.

And now, to the drinking part of the encomium. As aforementioned, his home has often been opened to us and where whisk(e)y meets ice (in his case), the good times let roll. University of Texas coordinators are vilified for their maneuvers and when the pontificatin’ hat &tm; is on, wisdom erupts. For these reasons I would call Ryan fun and, betimes, wise.

For many years my favorite part of Austin was queso, but now , here along a blustery San Francisco street, as the sun fades unto its Asian transit, the best part of my experiences in Austin all seem to have happened at his home.

So to Ryan, who celebrates a birthday today, I wish a Happy Birthday, and my regrets that I’m not there to hand it over in person. 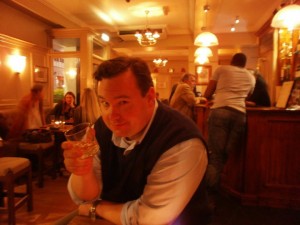