Recently I was practicing building an implementation of a binary search tree (BST), an important data structure often discussed in interviews, in JavaScript. While iterating, I found the ability to draw pretty pictures (“directed graphs”) of the structure helpful. This became even more important when the data collection got big or when the operation got complex e.g. deletion of an interior node with re-homing of “orphans”.

In this post, I’ll show how to get started with visualizing complex structures with directed graphs. At the end of this post, you’ll see how I created a BST from a shuffled Array of Integers and displayed its structure as an image file using Graphviz. While we’ll be working with a BST, this technique is helpful for many data structures, and the odd diagram needed to communicate with your team. Along the way, we’ll see how the approach we’re taking aligns with “The Unix Philosophy.”

With this knowledge, instead of inspecting a BST like this with console.log():

we can look at:

That seems easier to reason about to me!

“The Unix Philosophy” is some timeless wisdom. It has literally never steered me wrong. The majority of design patterns, the current vogue around functional concepts, strategies for not getting project deliverables wrong all have, at their heart, “The Unix Philosophy.” Written by Doug McIlroy, these four programming admonitions save lives, save time, and unleash potential. I’ve added small annotations in brackets. I admit I am standing on the shoulders of giants.

“The Unix Philosophy” helps us work fast-and-dirty by building on each others' programs. It encourages “falling forward” and rapid iteration cycles. Discussing how this philosophy should be part of your daily command-line approach is beyond the scope of this post, but is a worthy use of time.

By the logic of “The Unix Philosophy,” then:

If I were to find a program that creates pretty visuals of graph data structures from ASCII, if I could get my program to generate the proper ASCII output, then I could get a pretty image of my tree. I’d contrast this to “The Non-Unix Philosophy” of “I need to download a graphics library and put that in with my BST implementation.” The first approach encourages collaboration, modularity, letting other experts buoy you up. I opted for that one.

Fortunately, such a graphics-generating program already exists, dot on OSX provided by the Graphviz package available via Homebrew.

The dot program has a ton of options, but let’s start with the a typical use invocation:

Common type values are pdf or png. The OutputFile name should accord with the -t you choose.

Here’s how I generated that simple DAG from earlier:

But wait, what’s in simple.dot? Well, amazingly enough, it’s just a plaintext file where nodes' values point to each other with simple “skinny arrows” (->).

In accordance with the Unix Philosophy, all I needed is for my_program to generate some plain text that I could hand to dot to convert to a PDF or PNG for me.

It’s beyond the scope of this post to discuss all the features of the dot source-file syntax, but these are the resources I have thoroughly understood hackishly copy-and-garble-in-hopes-it-works.

We know that we want to generate a DOT source file. I’m not including the code for the BST (try it out yourself!), but I do need to explain two methods of its API:

We save this output to a file by means of the redirection operator (>) and then use that file as input to the dot command. Once the dot artifact is created, we open that with the Preview application.

Protip: Consider binding mini-scriptlets like these to keybindings in your editor. This is easily done in vim with remap! and VSCode with the tasks.json file.

In this post we’ve learned (or reviewed) “The Unix Philosophy,” an approach for getting complex software collaborating in order to save us work. We’ve built a program in JavaScript that builds a dot-compatible text source file which can be given to dot to create beautiful directed graphs. In the next lesson in this series, we’ll make our DAG source files richer so that we can visually confirm that our BST operation of node-deletion worked.

As a preview of the future, let’s suppose we’ve decided to delete 77 and want to see what happens to its children in another graph. We might start with something like this: 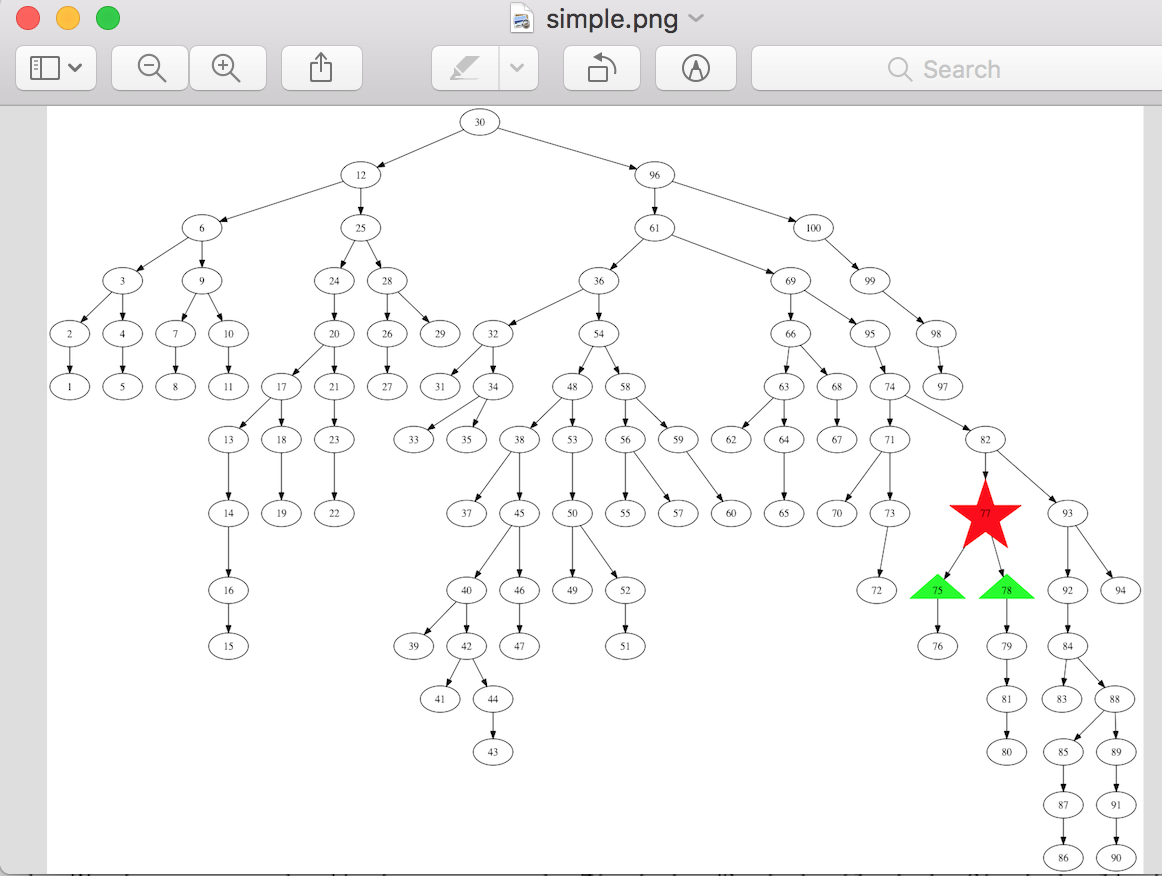