In 2000, Mark Z. Danielewski published House of Leaves. While ostensibly a genre novel (horror), the book is much more than that owing largely to its conceit, or if less kind, gimmick, that

In such a multi-layered tapestry there are many interesting discoveries and connections, to be discovered and House of Leaves has sprung a cottage industry of fan-theorists and analysis. I think I have found an “easter egg” hidden by Danielweski for those familiar with Latin and, specifically Ovid, that I’d like to point out.

SPOILERS: It should be obvious that there will be some spoiler potential after the jump.

As mentioned, Danielewski presents a number of narrative “frames” at the same time in the book. To support the reader in keeping these voices, commentaries and meta-commentaries clear, Danielewski uses the book’s layout and typesetting to drop breadcrumbs for the reader guiding the way to which narrative “frame” is being explored. For example, as a character goes through a narrow passage, the margins grow tighter and tighter while using the typeface of the innermost frame. 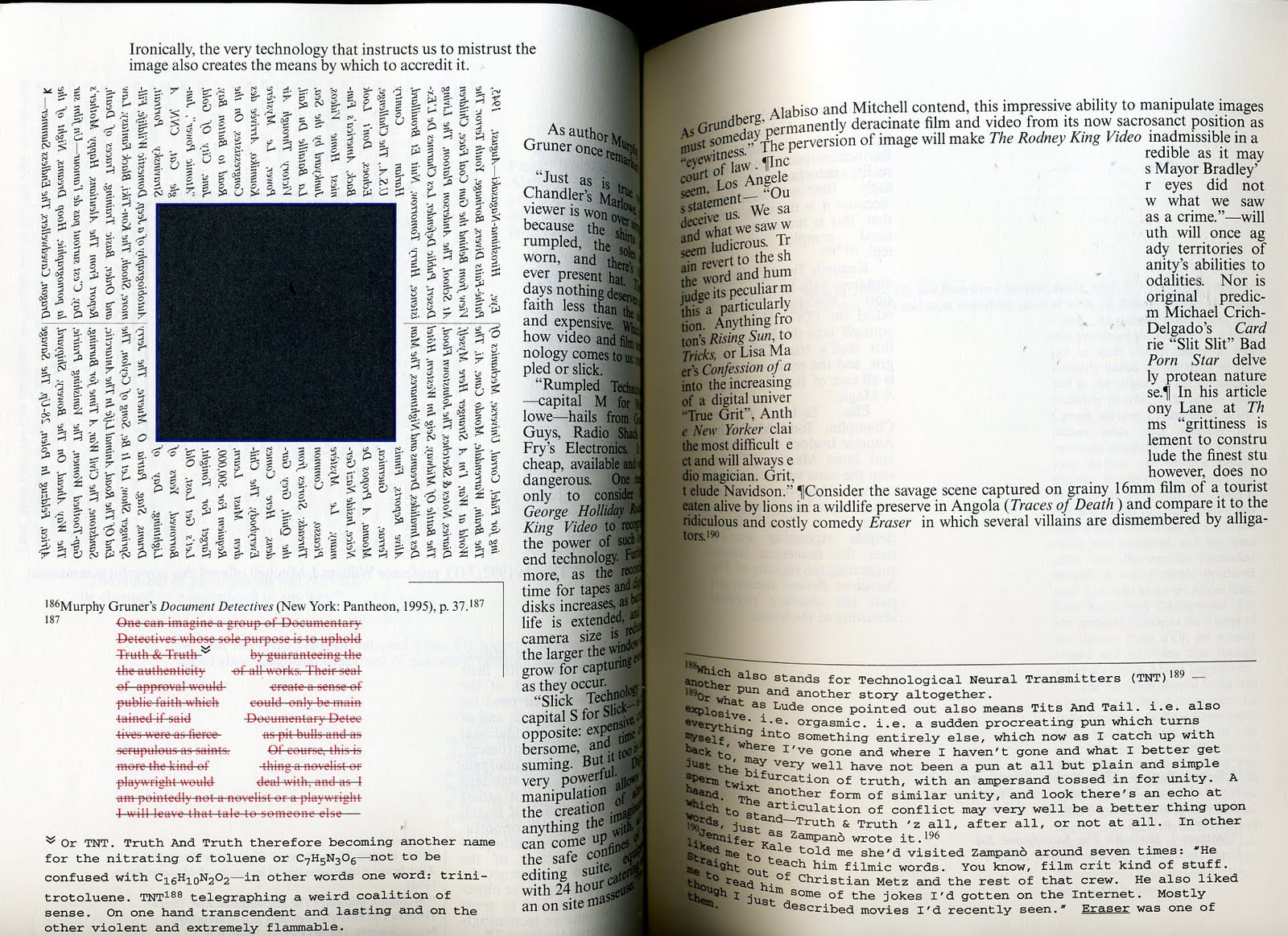 Danielewski, who did much of the layout design himself, uses layout as a tool for communicating the action and mood of the characters just as he does with his word choice, etc.

The easter egg is set near the beginning of the work. The reader has recently joined two relocated urbanites Will Navidson (photojournalist) and Karen Green (former model and mother to their two children) as they pursue that fabled flight from urbanism and its concomitant workaholism, ease of access to ex-lovers, and grime to a quiet, rural Virginian home. But there’s something wrong with this home, and it starts with only the smallest, slightest problem: the house is a mere fraction of an inch longer when measured from inside than it is when measured from without[1].

While the prospect of addition and geometry no longer working may seem to be a relatively un-adrenalizing horror compared to a zombie or demon-driven psychopath with a chainsaw, it is, in fact, a supremely unsettling horror. Kant wrote that the experience of space and time as ordered axes are so vital that no experience could be meaningfully discussed without having them as the base frame[2] for discussion ("a priori intuitions"). What would it mean to have those special preconditions for experience be brought into doubt in a way that “while not exactly sinister or even threatening…[destroys] any sense of security or well-being (p. 28).”

Will, an agent of [agon][agon], and hewer to of the macho, heterosexual male ur-myth, steps forth and attempts to conquer the offset by works of arms: laser tape measures, compasses, blueprints, second and third opinions.

Karen enlists a friend to help her seduce the monstrous House. They “fit” pine boards to a wall so that, when bounded by the two perpendicular walls, the plank creates a bookshelf. She lades the shelf with her books: pulpy collections of poetry and photos. She asks the lion to sit like a good kitty at her tea party and for a while it complies, bemusedly, bearing “her books…her ‘newly found day to day comfort’ (p. 34)[3].”

And then the beast snaps its jaws: a visitor bumps the row of books on the bookshelf and the book at the end falls off: more space has suddenly appeared such that the “bookshelf” has become a plank that seems to have been cut too short to fill the space, a novice carpenter’s error. Inconceivably, the wall has grown. The House’s indifference to spatial truth, a necessary truth, a truth as essential as 2 + 3 producing 5 or cogito ergo sum, is cruelly hurled at Karen as the chapter ends. She screams.

The next chapter begins a reflection on echoes and screams and their relationship to space. The commentary on this scene cites from Ovid’s Metamorphoses (my favorite Roman poem) the story of Narcissus and Echo. 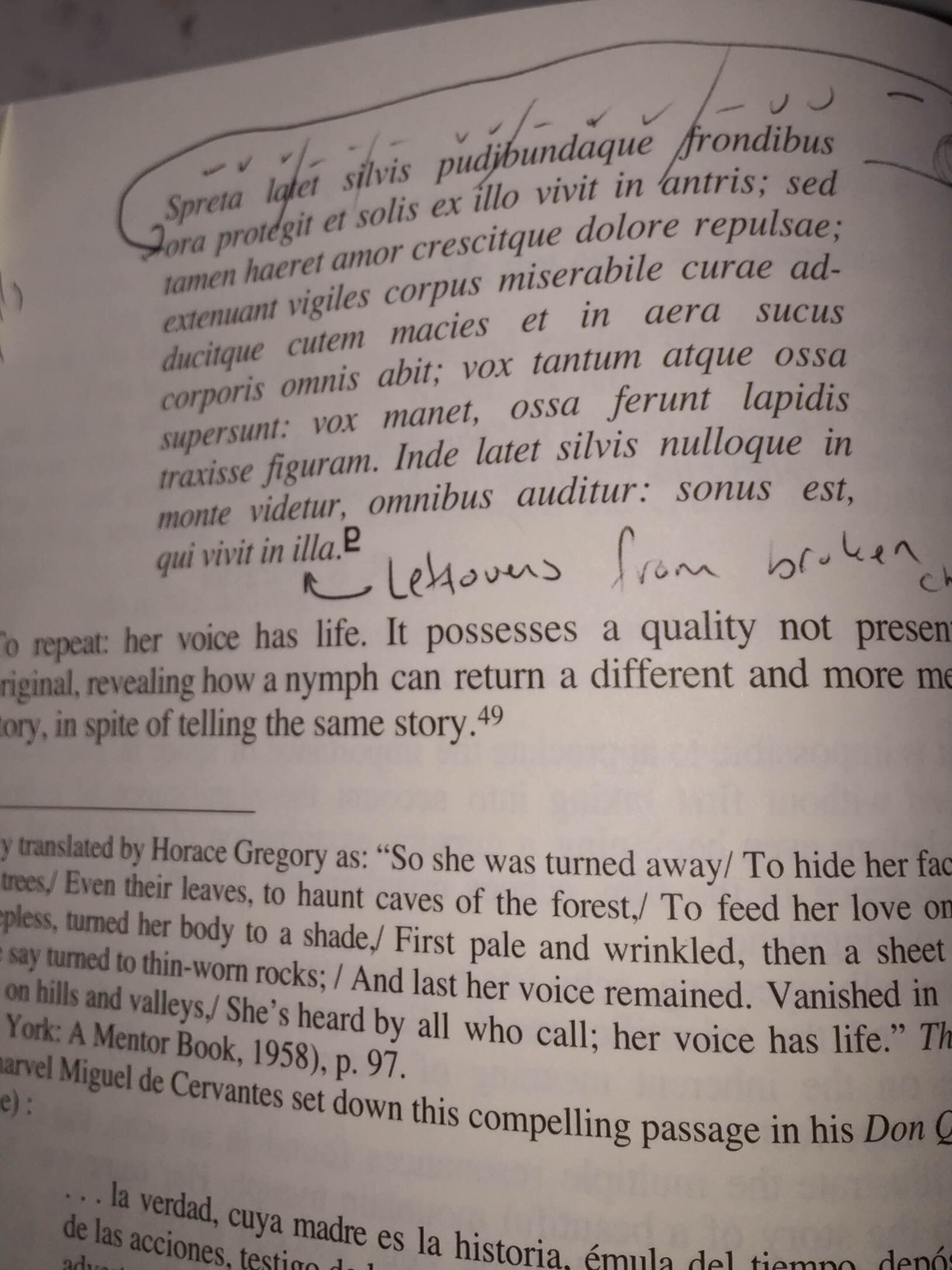 The passage describes Echo who, having been destroyed disobeys her mortal bonds (like the “fitted” House?) and rebelliously responds and bounces about as a voice. But something struck my eye immediately about this passage: it’s as broken as Karen’s bookshelf. Someone monkeyed with the typographical conventions of Latin poetry. The immediacy of the “wrongness” jumped out at me so flagrantly that I had to check the poem’s meter immediately.

The Walls of Latin Verse

Ovid’s poetry is written in dactylic hexameter. It has rules namely that each line has six metrical “feet” and should end with the last foot being two long sounds. It has boundaries as sturdy and strong as walls. Consequently it has a certain visual structure, and tends to look roughly rectangular. Lines usually look justified, even, and don’t tend to have “ragged” final lines. 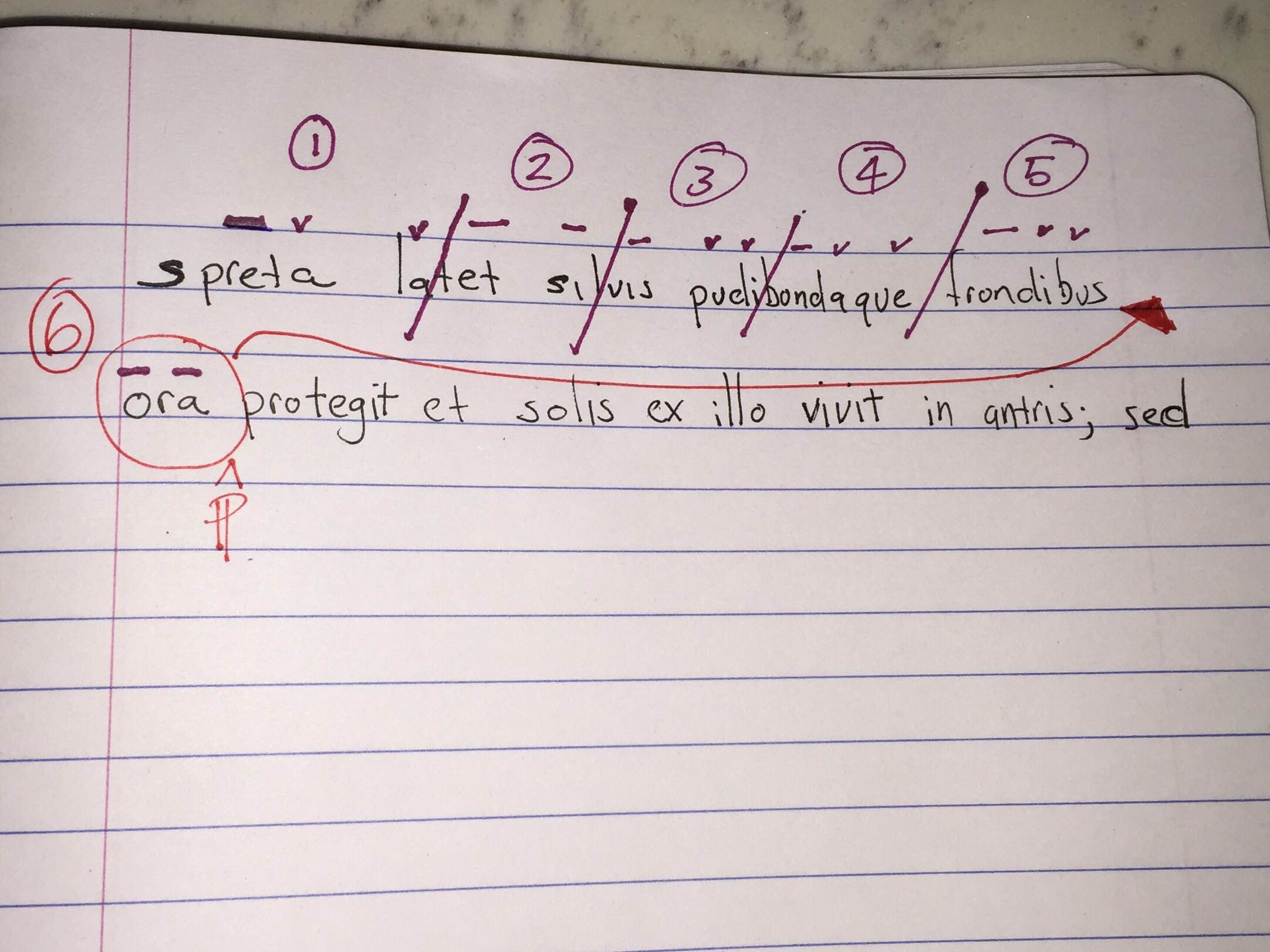 That is, “ora” (two long sounds) should have been at the end of the first line, but its bounding wall has been broken and it has fallen into the next line: just like the final book on Karen’s shelf which fell from its support onto the next lower support (the floor).

The book is full of other colorful references to semioticians, poets, critical theorists and is peppered with a heavy dose of smut. It mixes both high- and low-brow delights, and sports like Derrida’s jeux, in the interplay of textual contexts. For the classics students Danielewski found an exciting way to give us an extra dose of nagging error in the spatial dimension.