When I got my Linode VPS a few months ago, I became entranced of an idea, what if I could have a completely minimalistic developer laptop and do my “work” in the cloud.

I had played around with a few formulations of this ( iPad + keyboard ), netbook, MacBook Air, etc. With the recent release of the Chromebook I started to wonder: could I use the chromebook as a dumb terminal to my Linode? Any heavy processing would be done on the Linode, all I really need “locally” is to have acccess to an SSH client and a browser. I’m proud to say that the new Samsung 303C12 meets these needs. Now I have a $250.00 machine with no personal, local, data on which I can do all the development my heart desires.

I really like the idea of this because should the laptop be stolen, no seriously personal data can be stolen. Should the laptop be broken, it’s essentially commodity hardware. I love the idea that we’re now entering an age where everything can be “rented” from providers who deal in scale.

This post will cover some of the finer points of how I’m using this machine.

For developing on my own projects I have a Linode. On this Linode I host several Tmux sessions. Inside of these sessions I run Vim. In the following screen shot I’m running my mutt mail reader session in the top third and and writing (and executing) some NodeJS in the bottom half. The best part of having a Linode is that someone else backs it up for me and for $25.00 a month I have more CPU cycles than I can throw a stick at.

I have to say that my recent reads of Practical Vim and tmux: Productive mouse-free development were essential to seeing that one can work quite well within a terminal-only environment. 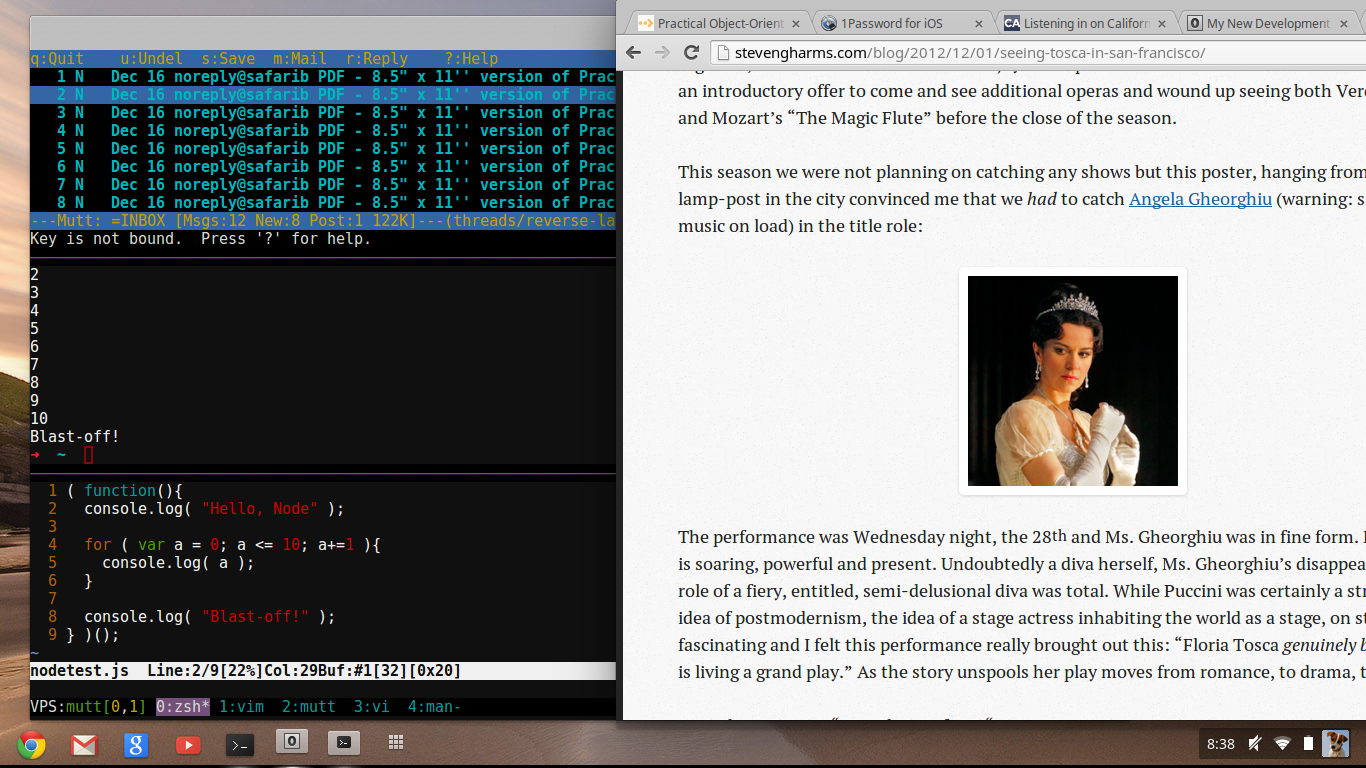 I’m convinced that in the future less and less of our data will be stored on our machines. Think about your mobile phone. Do you really want your address book mastered on that phone? No, you want your phone book to be managed by Google or Apple and replicated between your devices.

Look, no one’s going to beat Apple at this game, so I won’t lie to you. It’s not as nice as typing away on a MacBook Pro. It also costs less than one-tenth of the price of the MBP, so, given that, the hardware performs much better than one-tenth the quality components.

I don’t really care about any of that. It’s got a terminal and the best browser on the market. You can also run graphical mail readers like usual. There’s a nice local storage browser so that you can take screen shots and put them or, say, downloaded documents somewhere. The assumption clearly is that you will take those documents and put them on your Google Drive, which I did.

I was not impressed by how video playback is handled on the device. A TED talk or even a page with several animated GIFs hitches. But then again, I did say this was a development machine, maybe cutting down on some of those distractions would be good for you too :)

And that’s pretty much it. That’s all I do when developing, Vim, tmux, and Chrome. I don’t really have anything else to say about this. I’m really thrilled by the exceedingly light weight of the thing and the long battery life (about 7 hours based on my first run).